Do you still remember the text in the standard Manchu language, which is Ping Ding Hai Kou Fang Lui (The Book about Defeating Piracy, 平定海寇方略)? In this blog, I propose to briefly explain the background of editing this book, and I analyze and compare within this book. The most importantly, I analyze and compare the version of this book in two languages, Chinese and the Manchu language. By understanding this analysis, I argue that the Manchu language texts and Chinese texts are different and equally important to know.

Ping Ding Hai Kou Fang Lue was edited for recording the battle between the Qing Empire and the Zheng Regime in Taiwan, which was regarded as pirate for the Qing. The Zheng Regime was formally created by Zheng Chenggong, as known as Koxinga, during Ming Qing transition. However, Koxinga’s father, Zheng Zhilong, was the substantial founder of this regime in the later Ming Dynasty. Zhilong was originally a pirate as well as a trader, but he was recruited by the Ming government as an official general in Fujian, a southeastern province of China, so as to help the Ming Court to suppress other pirate in 1627.

After few years, in 1635, Zhilong successfully defeated the last resister. Due to Zhilong’s contribution during these years, Zhilong had been appointed as the commander of Fujian. Zhilong became the practical controller in Fujian. During Ming Qing transition, although Zhilong supported the Ming Court at the beginning, Zhilong eventually decided to surrender to the Qing Empire, but he did not bring all troops and property with him to Beijing.

Instead, Zhilong’s brothers and sons were still in Fujian with holding unbelievably powerful army and navy. Koxinga, Zhilong’s eldest son, was not the most powerful general in the Zheng Regime at this time, but, as a half Japanese and trained as a Japanese samurai and a Chinese Confucianist, Koxinga gradually nibbled up his relative’s troops and annexed their territory to enhance his power. Around 1650s, Koxinga had not only dominated the Zheng Regime but also become the most influential and powerful anti-Qing power in China.

However, in 1660, Koxinga misapprehended his capacity, so he attacked Nanjing City beside Yangzi River. Undoubtedly, he failed because of Koxinga’s arrogance and misstep. Next year, he led his navy and army to Taiwan. After one-year battle with the Dutch East India Company, Koxinga accepted Dutch’s surrender, and the Zheng Regime began to reign Taiwan as an anti-Qing basis. From 1661 to 1683, the Qing Empire and the Zheng Regime negotiated with each other to intend to find a balance to keep peaceful sphere. However, they never reached an agreement.

There are 25 Fang Lues officially edited by the Qing Empire, and the form of Fang Lue is edited by chronological. However, among them, the Ping Ding Hai Kou Fang Lue was the only one which was not found the formal version in Chinese. In other words, it was a draft. For the past century, this version was the only one recognized, which had four volumes. In 2011, I’m the first person to discover the draft in the Manchu language although there were only first three volumes remaining.

Additionally, another noticeable difference between two volumes is that there are a lot of terms regarding the emperor, such as hese, dergi, hesei, and wasimbuhagge. Does this indicate that emperor is less important in the volume 2? Yes, it does. In fact, this perhaps addresses that the content of the volume 1 records the emperor’s orders, but the content of the volume 2 mainly records the discussion between ministers and generals as well as the battle between the Qing and the Zheng.

Table 1: comparing the difference in the first and second volume.

Table 2: comparing the similarity in the first and second volume.

Table 3 suggests that the most frequent words in the volume 2 but not in the volume 3. Apparently, besides numbers (minggan, emu, juwe, and ilan) and gaimbi in different forms (gaifi and gaiha), the rest words are related to name of people or place. The question here is why gaimbi, referring to “get” in English, appears frequently. According to the content of the second volume, it primarily accounts the battle between two regimes, so it makes sense because gaimbi also refers to “occupy city” in English. As a result, the volume 2 in fact discusses how the cities in Fujian were occupied by turns.

Table 3: comparing the difference in the second and third volume

Table 4 suggests the most similar words. Besides the auxiliary words, over half of the most frequent words in both volumes refers to name of place or people. However, noticeably, the surname, such as jeng and u is often the most frequent in both volumes. This actually indicates that in the Manchu language version, the author preferred to write entire name instead of only first name. This is in fact very different from the Chinese version, whose author preferred to write only first name.

Table 4: comparing the similarity in the second and third volume

The Comparison of the same text in the different language

As mentioned, for over one century, the Chinese version was the only recognized one. Since the new version in the Manchu language has been discovered, it is important to compare two versions.

However, noticeably, Chinese is hard to analyze as a systematical language. Since Chinese is an alphabetic system of writing, each Chinese character might have multiple meanings and multiple Chinese combined together will generate different meanings. Due to these features of Chinese characters, I would like to use a different way to analyze and compare two texts. First, I analyze the text in the Manchu language to recognize the frequency of each words. Then, I search the top 20 frequent words in Chinese version to see whether the frequency is similar. As a result, let’s search the most frequent words in Volume 1, 2, and 3 in the Manchu language version, and check out the frequency in the Chinese text.

Table 7: the comparison of the frequency of words in the volume 1

Graph 1: The comparison of the frequency of words in the volume 1 as a line graph 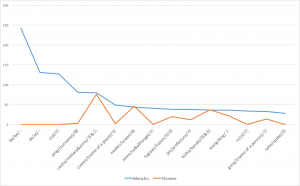 Table 8: the comparison of the frequency of words in the volume 2

Figure 2: The comparison of the frequency of words in the volume 2 as a line graph 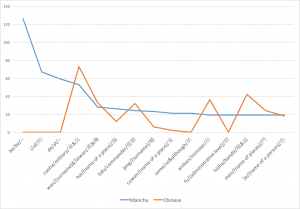 Table 9: the comparison of the frequency of words in the volume 3

Graph 3: The comparison of the frequency of words in the volume 3 as a line graph 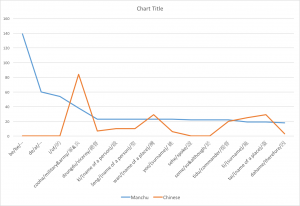 As can be seen, Table 9 and Graph 3 suggest that name of places or people were more complete in the Manchu text than Chinese text. This is also apparent in the volume 1 and volume 2.

This comparison is meaningful because this comparison is related to a debate between the New Qing History and its opponents. For a long time, Chinese sources have been the dominant sources to study Qing history. For these scholars, primarily the opponents of the New Qing History, the Qing Empire was not an empire; in the lieu of an empire, the Qing was entirely incorporated by Chinese culture and system, so the Qing was actually one of Chinese dynasties. This perspective was called Sinicization. In order to support their idea regarding Sinicization, they claimed that all texts written in the Manchu language was just the copy of the Chinese version, so the versions in the Manchu language were meaningless because scholars could directly read Chinese version.

Is this correct? Let’s look the new graphs, which are modified from Graph 1, 2, and 3. They are Graph 4, 5, and 6. The main difference between Graph 1, 2, 3 and Graph 4, 5, 6 is that I omit the term in the Manchu language but not in Chinese, for example auxiliary words. The reason is not because these terms do not exist in Chinese but they exist in the thousand possibilities in Chinese, so it is difficult to define which words in the Manchu language directly refer the words in Chinese; otherwise, I do a carefully reading. 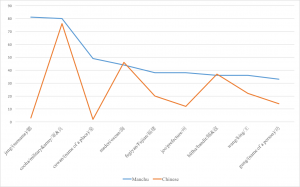 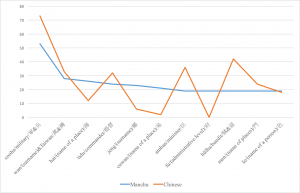 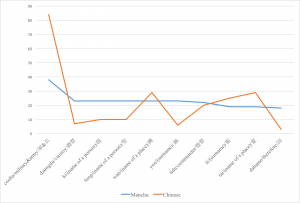 Do you notice anything? The answer is quite obvious. Even though the same nouns, usually place or people’s name, appeared in both texts, their frequencies are still significantly different. Can the opponents of the New Qing History insist to claim that the Manchu language versions were just the copy of the Chinese version? I do not think so.

Admittedly, it is not sure whether this comparison is meaningful, but it does suggest a general idea. The idea is that the Manchu text was usually more precise than the Chinese text. However, in other words, Chinese can be more laconic. As a result, this might imply that the Manchu language was still less mature than Chinese, in some degree.

Apparently, there is a big question waiting for answering. Let’s look at Table 7, 8, and 9. Some terms, such as tidu, fugiyan, dzungdi, and so on, directly referred to a certain place or people. However, why were the number of these terms in the Manchu and Chinese texts different? According to the comparison and graphs, the Manchu language version and Chinese version were in effect different. Neither one was just the copy of another version. They were equally important but addressed to different audience and purpose.

Consequently, since this comparison had offered a general picture, the next step might be to do a closed reading to come up with the answer for the detail difference between the text in two languages.