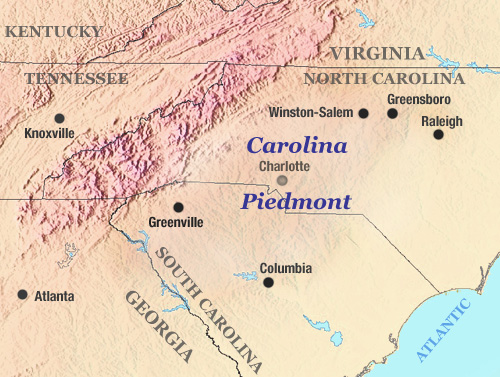 Among the rolling hills, small farms, mills, and coal and railroad camps of the rural East Coast Piedmont, between Tidewater coast and the Appalachian Mountains of Virginia, the Carolinas, and Georgia, black and white economic and cultural patterns have overlapped considerably — more so than in the nearby areas or the Deep South. Piedmont blues styles reflects this, meshing traces of gospel, fiddle tunes, blues, country, and ragtime into its rolling, exhuberant sound. –Nick Spitzer

“White House Blues,”   Charlie Poole and the North Carolina Ramblers. New York, 1926.  LYRICS. Charlie Poole, vocal and banjo; Posey Rorer, fiddle; Ron Harvey, guitar.   Charlie Poole (1892-1931) and the North Carolina Ramblers were one of the most popular white string bands of the 1920s. Poole was from the piedmont region of North Carolina and like many in the region worked in textile mills. Playing banjo in a sharp three-finger picking style, Poole’s idol was Al Jolson and he based his singing style on him (Bill Malone, Country Music U.S.A, pg. 51). Poole died at age 39 from a combination of hard living and alcoholism. “White House Blues” has been performed by many groups and has become a bluegrass standard.

Blind Willie McTell (1901-1959) grew up in Statesboro, Georgia, and made his living as a popular street musician. Playing a twelve-string guitar, he was recorded frequently by field-recording units visiting Atlanta between 1927 and 1935.  McTell’s repertoire spanned everything from blues, black and white folk song, and religious music. His many years of street performing in Atlanta, as well as in the small medicine shows that travelled the countryside, were largely responsible for McTell’s extensive and eclectic variety of songs. McTell was raised from the age of nine in Statesboro, where he first heard the blues. “Georgia Rag” is a ragtime piece of several strains that McTell performs in typically breezy fashion, his lively, exhortatory vocal choruses alternating with finger-picked ones notable for the confident, resourceful fluency and easy rhythmic fluidity of their execution. Source: Great Blues Guitarists: String Dazzlers. Roots N’ Blues series from Sony/Columbia, 1991)

“Thousand Woman Blues,”   Blind Boy Fuller (Fulton Allen). Recorded in the mid-1930s. LYRICS. Born in 1908 in Wadesboro, North Carolina, Blind Boy Fuller began playing seriously after losing his eyesight in the late 1920s. He was the most prolific and best-selling recording artist in the Southeast in the 1930s. Although couched in blues structure, “Thousand Woman Blues” probably began as a field holler or a work song. The very modal sounding vocal is enhanced by the fine guitar work that unexpectedly erupts into double-time phrases. (This selection taken from the album Before the Blues, Yazoo Records 2017).

“Key to the Highway,” Brownie McGhee, vocal and guitar; and Sonny Terry, vocal and harmonica. ca 1967. (Introduced by Pete Seeger)  Blind since childhood, Saunders Terrell (Sonny Terry) (1911-1986) was born in Greensboro, North Carolina. He met Brownie McGhee (1915-1996) in North Carolina in 1939. They had both been attracted into the orbit of Blind Boy Fuller and worked with him before his death in 1941. In the early 1940s, they settled in New York and into a long-lasting musical partnership .

“Hesitation Blues,”   Reverend Gary Davis, 1957. A virtuoso guitarist, Gary Davis (1896-1972) was capable of improvising tirelessly in several keys. Growing up in South Carolina, he learned from the blind guitarist Willie Walker. He taught Blind Boy Fuller and at some time in the 1930s was ordained as a Baptist minister. His religious beliefs forbade his singing secular material. He moved to New York in the early 1940s and made a living as a street singer.