A Few Examples of Texas Blues and Gospel Blues

“Fishing Blues,”   Henry Thomas, guitar and quills. Henry “Ragtime Texas” Thomas (1874-1960s?) was middle aged when he recorded for Vocalion Records between 1927 and 1929. His musical style was so unique that Thomas has continued to be intriguing to modern listeners. Because of his age, his recordings mark an example of forms of nineteenth 19th century African-American music to make it to disk. A blues singer and songster, one of the more impressive facets of his playing was his use of the quills (a form of pan-pipe made from cane). The quill solos along with his backup guitar gave his songs an other-worldly quality.

Thomas was born and raised in the Big Sandy area of Texas. He played the streets of Dallas and various country dances. Interviews with living relatives in later years paint the picture of a hobo and a wanderer who was often able to travel by train as entertainment for the other passengers. Folklorist Mac McCormick quite likely had a chance meeting with Thomas on the streets of Houston in 1949 and described him as a big man, perhaps 6″3″. The spirited feel of Thomas’ music found many fans during the folksong revival and versions of his songs cropped up even with those who may have had very little inkling of the man himself. Thomas’ quill solo in the song “Bull Doze Blues” became the basis for the introduction in the rock group Canned Heat’s “Going Up the Country.” “Fishing Blues” was another song which made it into many repertoires. The 60s group the Lovin’ Spoonful recorded a tribute to him as “Henry Thomas” replacing the quills with a kazoo.

Willie Johnson didn’t record any secular songs, but there is much similarity between his relentless guitar rhythms and his harsh, insistent voice and the same fierce intensities of the blues singers, that they complement each other and their time and place. From a farming family, probably of sharecroppers, he lived as a child near Marlin, Texas, about eighty-five miles south of Dallas. LYRICS. 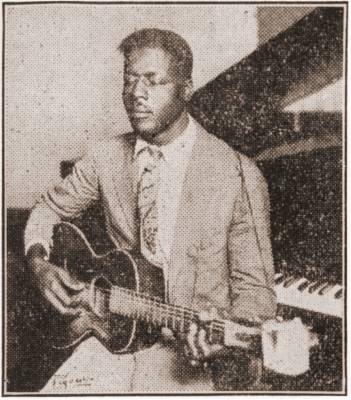 “Dark Was the Night, Cold Was the Ground”   Blind Willie Johnson, vocal and slide guitar. Recorded in Dallas, 1927. The complete title of this old hymn is “Dark Was the Night and Cold Was the Ground on Which Our Lord Was Laid.” As it was sung in this part of Texas, this was a slow, solemn, responsive psalm, in which the preacher intoned the first phrase, very slowly, and the congregation responded with the same measured solemnity. What Johnson did in the studio was to create this mood by playing the melody through the slide on the guitar strings, and following its phrases with a wordless, half-hummed meditation on the meaning of the song.
On Saturday afternoons in Marlin with farm families in town to do some shopping, Blind Willie Johnson might be found singing his gospel songs on one street corner while Blind Lemon Jefferson sang the blues on another. Johnson’s recording career began in 1927 when he went into a studio for Columbia Records in Dallas. Columbia’s 140000 Race series was one of the best selling “race” labels with such singers as Bessie Smith, Ethel Waters, Clara Smith, Lonnie Johnson, Barbecue Bob, and Peg Leg Howell.

Throughout the Depression and the 1940s, Johnson lived in Beaumont, Texas, a member of the Mt. Olive Baptist Church. He earned a meager living singing on the streets and performing for church benefits.

“See That My Grave Is Kept Clean,”   Blind Lemon Jefferson, vocal and guitar. Recorded in Chicago, 1928. Jefferson was born in Wortham, Texas, about sixty miles south of Dallas in 1893. Little is known of him until 1926 when “Got the Blues”/Long Lonesome Blues,” his second blues release was the first best-selling blues record by a black male singer. He became one of the stars of the Paramount label, the leading producer of “race” records. He died in 1929 in Chicago.  Jefferson impressed white musicians no less than black and was remembered with respect by Roscoe Holcomb in Kentucy and Hobart Smith in Virginia. His “Match Box Blues” has been repeatedly recorded by white and black artists. Source: Anthology of American Folk Music (Smithsonian Folkways).

“Slavery Time”  Lightning Hopkins, vocal and guitar. LYRICS. Recorded in Houston, 1967. Sam “Lightnin” Hopkins was born in 1912 near Centerville, Texas, midway between Dallas and Houston. His older brothers and sister played guitar, and he also hung out with Blind Lemon Jefferson. As a young man he tried farmwork, but realizing what it was like, concentrated on music as his ticket out of wage-slavery. By 1946 he had enough of a reputation in the clubs along Houston’s Dowling Street to win an audition with Aladdin Records in Los Angeles. In the following years he recorded for many labels. When rock ‘n’ roll came in, Lightnin’ went out, until blues historian Sam Charters tracked him down in Houston in 1959 and recorded an acoustic set which became one of the key documents of the blues revival. By the end of the 1960s, he had thirty-five new albums to his name and had travelled widely in the US and Europe. He died in Houston, his home for most of his adult life, in 1982.