Nationwide mobile sources (mostly cars and trucks) account for approximately 30% of emissions of oxides of nitrogen and 30% of hydrocarbon emissions. In the 10-county metropolitan Atlanta area, on-road cars and trucks account for 58%  of emissions of nitrogen oxides and 47% of hydrocarbon emissions. The respiratory health hazard follows. Sprawl is associated with high levels of driving, driving contributes to air pollution, and air pollution causes morbidity and mortality.

Automobiles now cost around 1,000 lives each year in Georgia and 30,000* lives each year in the United States. “Suburban roads may be a particular hazard, especially major commercial thoroughfares and “feeder” reads that combine high speed, high traffic volume, and frequent “curb cuts” for drivers to use in entering and exiting stores and other destinations.” Nationwide, the increase in number was dramatic in 1900s.

Automobiles and pedestrian-hostile roadways are also causing pedestrian injuries and fatalities. In Georgia there were 176 pedestrian fatalities in 2013 according to NHTSA traffic safety facts and 66,000 total nationwide injuries in the same year. CDC researchers study the data and conclude that older adults and children are at a higher risk of pedestrian injuries.

Land use decides travel patterns. If distinct land uses are separated, distances between them are great, and roads more available than sidewalks like in many Atlanta Suburbs, then people choose driving instead of walking and biking. A sedentary lifestyle increases risk for cardiovascular disease. According to CDC, 33.9% of Atlantans in metro area are overweight  and 22.1%  of them sedentary.

Dark surfaces such as roadways absorbs heat from sunlight and re-radiate it as thermal infrared radiation and these surfaces can reach temperatures of 50°-70°F higher than surrounding air. Heat-related morbidity and mortality disproportionately effect poor people and members of minority according to Global Health Action. During 1999-2003, a total of 3,442 deaths nationwide resulting from exposure to extreme heat were reported. Average annual temperatures in Southeast region (which includes Atlanta) are projected to increase by 4°-9°F by 2080. 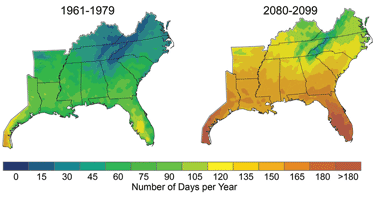