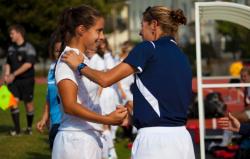 Ishaan Jalan (BBA13) organized for the third year TEDxEmory, an independently organized TED event, on April 20 with 12 speakers and over 500 attendees. TED is a nonprofit organization devoted to the transmission of “Ideas Worth Spreading.” Yunjing (Joyce) Li (BBA14) was Director of Membership, Raghav Rungta (BBA15) was Director of Finance and Sushmitha Radhakrishnan (BBA15) was Webmaster.

Dr. Christopher Rider, Assistant Professor of Organization and Management was nominated by students for the Crystal Apple Award for Excellence in Undergraduate Business Education on February 25. The award honors faculty who go above and beyond in their search for knowledge and involvement within the Emory community.

The 16th-ranked Emory University women’s soccer team finished second at the 2012 NCAA Division III Women’s Soccer Championship. Lee Bachouros, (BBA13) played in this championship game.  The Eagles ended the 2012 campaign, the most successful in the program’s history, with a 15-2-7 overall record.

Alex Duhl, (BBA13)was named to the American Volleyball Coaches Association All-America Team for the 2012 season. Duhl stood second on the team with a 2.24 kills-per-set average while her .299 hitting percentage was second on the club and fifth among UAA players. An all-tournament selection at the Guisler Invitational, the Emory Invitational and Emory Classic, she closed out her career in 11th place all-time at Emory with 293 total blocks.

Seniors Nick Jones, David Garofalo and Alex Scott saw their last games as Eagles in November. Emory Soccer ended the year with an 11-7-2 overall record, finishing the season strong with a mark of 9-3-1 in its last 13 games of the season, and winning its seventh University Athletic Association (UAA) Championship.

Gabrielle Clark(BBA14) led the Eagles to a second-place finish in the team tournament, and finished in the semifinals of both the individual singles and doubles draws during the 2013 NCAA Division III Women’s Tennis Championships in Kalamazoo, Michigan.  Clark finished the season with a 30-7 record in singles play (tied for the second-most wins in a single season in school history) and 28-7 in doubles action.  In addition, she ended her junior season with 84 career singles wins, the third-most in school history, and 86 career doubles victories, the fifth-most in school history.  Clark earned all-America honors in both doubles and singles play for the third-straight season in 2013.

This marked the second-straight season that Ford has been selected to the Academic All-District Team.

Chambers was selected as Emory’s Scholar-Athlete of the Year in 2013, recording a perfect 4.00 GPA during his collegiate career.  He finished his career with six all-University Athletic Association (UAA) honors, including a third-place finish as a part of Emory’s 4×400-meter relay at the 2013 UAA Indoor Championships.  Chambers is the program’s record-holder in the indoor 500-meter dash with a time of 1:07.51, and has career-best outdoor times of 22.95 seconds in the 200-meter dash, and 49.67 seconds in the 400-meter dash.

Ford recently wrapped up one of the best careers in Emory history with a second-place finish in the heptathlon at the 2013 NCAA Division III Championships, setting school records with 4,828 points and a height of 1.72 meters in the high jump.  She also earned an All-America honor in the individual high jump, finishing fourth in Division III.  During the indoor season, she registered all-America honors with a fifth-place finish in the high jump and a sixth-place finish in the long jump.  In addition, she is a three-time UAA Most Valuable Performer honoree, including during both the indoor and outdoor championships in 2013.

Moserowitz was the top performer for the men’s track and field team in 2013, earning the UAA Most Valuable Performer honor for field events during the indoor season, after winning both the long jump and triple jump at the conference championship meet.  During the outdoor season, he won the triple jump at the UAA Championships, and finished second as part of Emory’s 4×100-meter relay.  He has registered career-best marks of 6.79 meters in the long jump and 14.02 meters in the triple jump.

Adjibaba is a four-time All-American and three-time UAA Most Valuable Performer for running events.  This outdoor season, she was named the UAA MVP for the second-straight year, and competed in the 60-meter dash, 200-meter dash, 4×100-meter relay and 4×400-meter relay at the NCAA Championships. During the 2013 indoor campaign, she earned all-America honors with a fifth-place finish in the 60-meter dash and a seventh-place finish in the 4×400-meter relay.  Adjibaba is a 12-time UAA Champion during her two-year career, and a conference record holder in four events.

The Capital One Academic All-District teams are aimed at recognizing the nation’s top student-athletes for their combined performances athletically and in the classroom.

This entry was posted in Around the World, BBA Student Achievement, In the Classroom, Student Life & Leadership and tagged Accolades, Athletics. Bookmark the permalink.