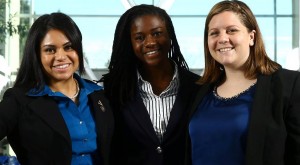 Goizueta is preparing leaders to succeed in the global marketplace. What better way to sharpen your skills and differentiate yourself than to compete in a case competition en español! Angelica Calderon, BBA14, Elisse Jean-Pierre, BBA14 and Kristin Rebescher, BBA14 did just that at the Business Language Case Competition hosted by the Marriott School of Management at Brigham Young University, November 8, 2013. Only non-native speakers are permitted to participate in this competition; however, each team may include someone who was raised in America, but who grew up speaking the language of their heritage in the home.

The Spanish case was distributed two weeks prior to the competition. The team was tasked with recommending to Walmart whether they should enter the organics food market. Content and delivery of the case presentation counted for 2/3 of the score, while language usage and grammar counted for the remaining 1/3.

Each team presented a total of three times to three separate groups of judges within a span of four hours. After a tour of the BYU campus, the finalists were announced: Indiana University, Brigham Young University and EMORY! The finalists presented before a large panel of Spanish-speaking judges from different business disciplines.

The judges praised the Goizueta team for taking the sole stance against Walmart entering the organic foods market and their extensive data and market research to defend their recommendations. The panel commended the team’s command of the Spanish language and the fact that Goizueta was one of two all-female teams.

At the closing ceremony keynote speaker and Continental Grains President Michael Hoer spoke about the importance of learning new languages and immersing oneself in other cultures in the ever-globalizing business world. After a dinner prepared by the BYU Hospitality program, the results were in and Emory secured second place! This was the first time any of the participants had competed in a case competition. With a wealth of new Spanish business terms to share, the team returned with certainty that the fall 2014 team will bring home the gold.

This entry was posted in Around the World, BBA Student Achievement, Student Life & Leadership and tagged case competitions. Bookmark the permalink.