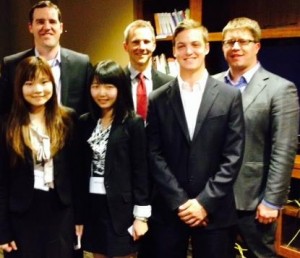 Do you dream of performing like Beyoncé?  “We’re trying to give everyone that celebrity experience,” explains Victoria Tao, BBA14 who developed MV Booth together  with Julie Shen, BBA14.

After meeting in a Japanese film class at Emory and discovering their shared a passion for Japanese culture, the duo decided to develop the concept for MV Booth.  Similar to a photo booth, people would be able to film themselves in a music video booth. The customer would select a song from a library and start performing. Added effects would include back-up dancers, colors and various video editing features. Tao, a Computer Science double major, will program MV Booth so customers can easily share the finished product on Social Media.

When they heard about the Siperstein Business Plan Competition, started by alumnus Jason Siperstein and open to all Emory undergraduates, they submitted their 3-minute YouTube pitch and 2-page Executive Summary. The plan included two parts: 1) Professional recording studio for aspiring song writers with multi-tiered pricing and 2) Music video booth.

On April 16, along with seven other teams, they presented before a panel of judges for 10 minutes and answered questions for five minutes. The potential market opportunity for the booth most impressed the judges. Despite the fact that their business plan was only in the concept phase, Julie and Victoria were thrilled to win the $2000 prize. They both look forward to starting new jobs after graduation, while working on the next phase of MV Booth which involves patenting the concept and programming.