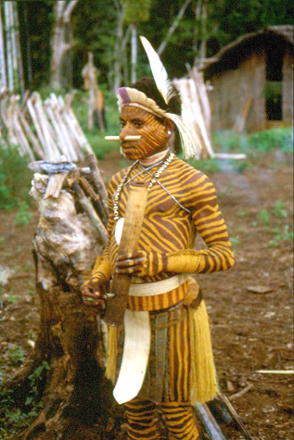 1. Modiay in his yellow “in-between” initiation costume, holding his tobacco pipe. Initiates are expected to be generous in giving tobacco and food. Note the large phallic leaf in Modiay’s costume. 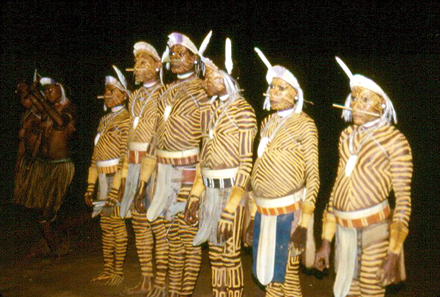 2. The six male initiates of Yibihilu stand at night in collective display facing a mass of entering visitors. 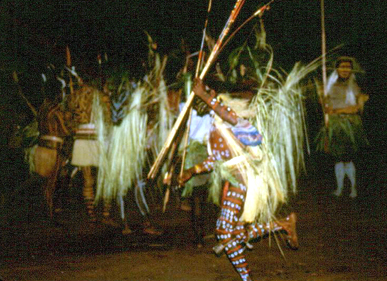 3. Visiting men in warrior costumes whoop, yell, and pluck their bows as they circle around the initiates, attempting to intimidate them. 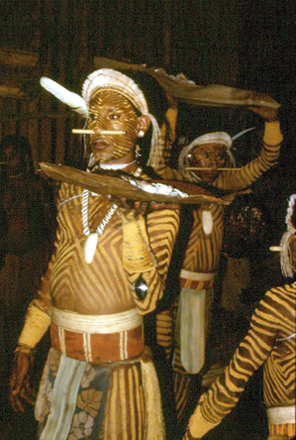 4. Initiates appease the visitors by serving them palm spathe plates heaped with food. 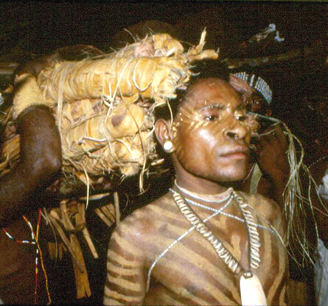 5. The morning after the feast, initiates sit to receive yellow bark wig (uga) that is tied to their hair. Yaba begins to tie Momiay’s uga into his hair. 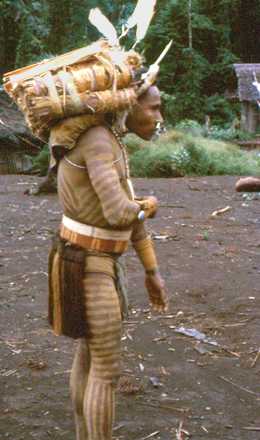 6. Momiay wears his completed uga. He hunches forward to help support its weight on his shoulders. 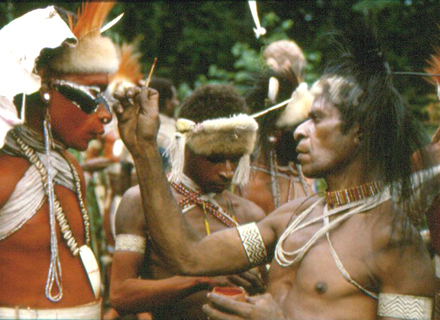 7. Wahi is decorated by his primary initiate sponsor, Swiman, in the red bird-of-paradise initiation costume.. 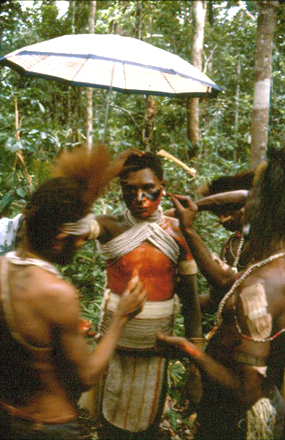 8. An initiate, Haymp is decorated while an umbrella is held to protect him from the rain of an approaching storm 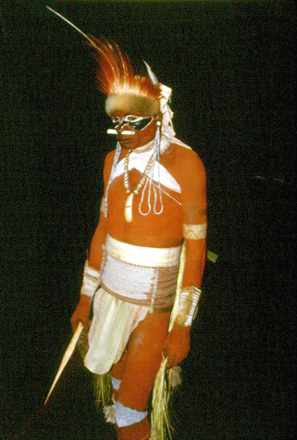 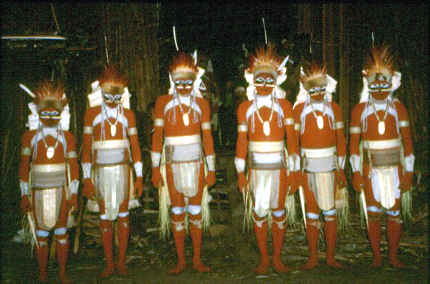 11. A visiting man dressed as a warrior charges out of the longhouse while wielding his bow and arrow. Behind him, the next in the series of stampeding warriors begins to emerge.  Warriors display in an attempt to intimidate the red-costumed initiates. 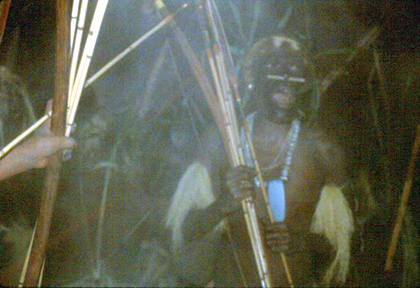 12. Men scream and pluck their bows in the longhouse, raising dust in the air. After their display, they settle down for a night of initiation festivities. 13. Initiation dance, with selected young women dancing in costume opposite male dancers. In the photograph, note that the man on the right wearing blue shorts is smiling and joking with the women standing to the left of the dancer along the sago thatch wall.   Joking between Gebusi men and women parallels the dance of seduction between the male and female costumed performers and between men and women in the spirit world 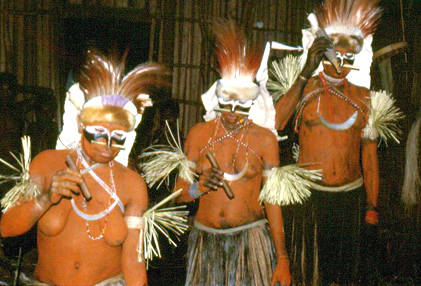 14. In a rare display, a line of three women dance during the night of the main initiation ceremonies. Each holds a rattle which she thrusts up and down in front of her, symbolizing the action of sexual intercourse.. 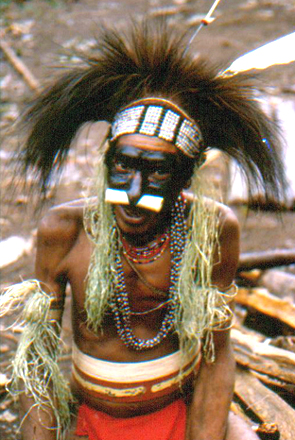 15. Costumes of those attending the Yibihilu initiation. 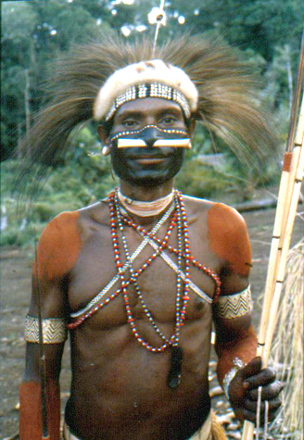 16. Costumes of those attending the Yibihilu initiation 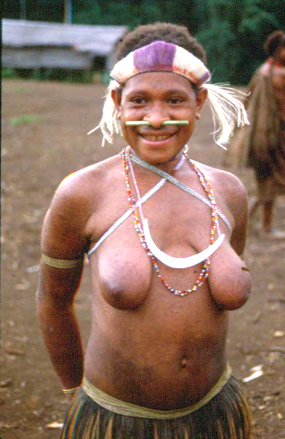 17. Costumes of those attending the Yibihilu initiation 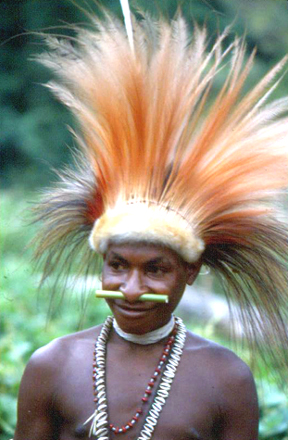 18. Costumes of those attending the Yibihilu initiation 19. Costumes of those attending the Yibihilu initiation 20. Man covered in mud, with big “testicles” and “bug-eyes,” after he has impersonated a corpse, run around, and scared youngsters. 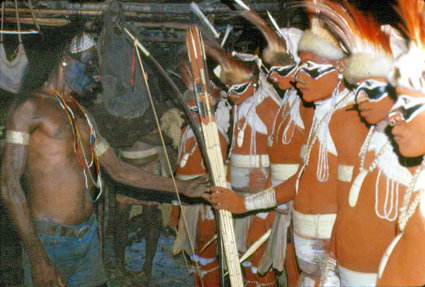 21. Imba presents a hardwood bow and set of carved initiation arrows to Yuway. 22. Wahi receives his gift from Eileen and me as initiate sponsors – a pair of blue satin gym trunks. Each of the initiates received a similar pair from us. 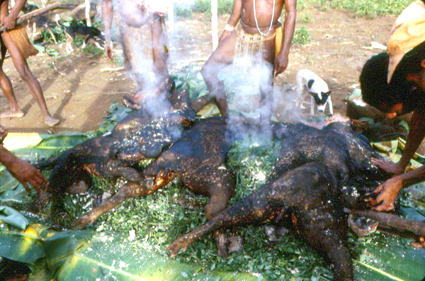 23. Initiation feast food of sago and greens is prepared at night. 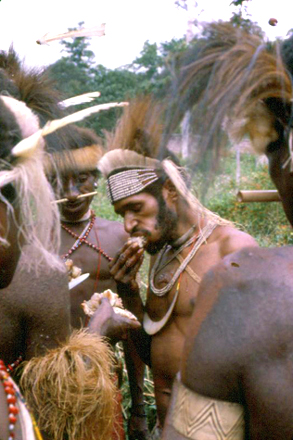 24. Slaughtered pigs are singed, splayed, and laid on top of greens and sago before being wrapped with leaves and steam-cooked for presentation to visitors. 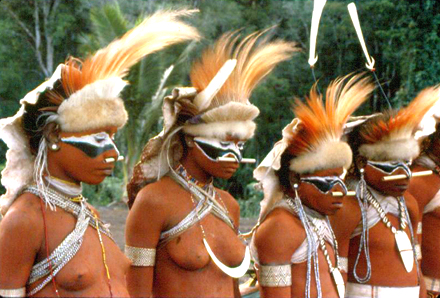 25. The obligation of good eating: Nogo is “force fed” fat from one of the slaughtered pigs.  This is a standard practice of “making recipient eat.” 26. The night after: an initiate in full costume dons a white feather “halo” and drum-dances for the first time – opposite a female Gebusi dancer. Within a few months of the ceremonies, all the surviving initiates had gotten married..