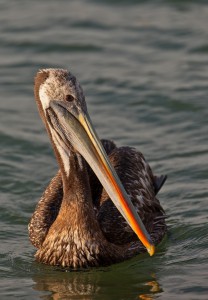 With a wingspan of up to ten feet, the majestic Peruvian pelican (Pelecanus thagus) is one of the largest birds in the Andes and figured prominently in ancient coastal aesthetics. These powerful avians stand at the top of their food chain, have very few predators, and lead fisherfolk to plentiful fishing grounds. They stand for fertility in many ways. With their distinctive yellow-to-red striped bill and blue-striped gullet pouch pelicans scoop fish from the water, but must drain the water to eat their catch – a process that allows smaller, scavenging birds to feed as well. The pouch also serves as a trough for pelican nestlings who stick their heads all the way in to eat regurgitated food. The ancients prized guano from the islands where pelicans nest; it remains a valuable commodity today that leads to more natural productivity. 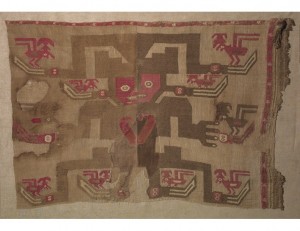 In Chimú art, this connection to fertility and abundance is repeatedly expressed, and pelicans even appear as a shaman’s animal self in the textile at left. This brocade is one of four pieces that originally made up a very large ceremonial mantle. The central figure has pelican heads for his feet and ears, and more of them project from his headdress, fingers, and belt. Thus, he is a shaman in transformation into a pelican. The pink abstracted concentric eyes and the red chest (where fish blood stains as they eat) are characteristic of the pelican. Small birds wearing crescent headdresses, –therefore representing high-status humans in bird-self form as well– gather around, like birds in nature. 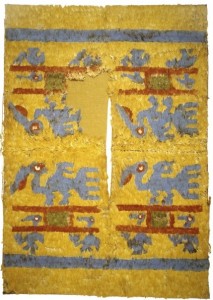 The feather textile to the right metaphorically links the pelican with Chimú social and political hierarchy. Although these pelicans do not wear human clothing, they behave like the Chimú, carrying a high-status individual on a litter. The exotic feathers, imported from the Amazon basin, testify to the power of the state in organizing the movement and control of precious resources. Featherwork was considered the highest art form of all in ancient times throughout the Americas.

In both of these textile pieces the Peruvian pelican serves as an appropriate metaphor for the Chimú religion/state while its status as a powerful animal spirit is underscored. The pelican, like the highest level of statesmen or shamans, stood at the top of its food chain, provided for others, and lived in strictly organized domestic spaces.