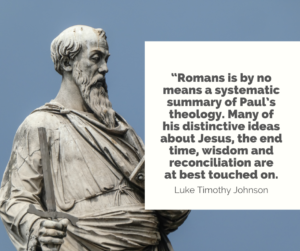 One of the most well-known passages that mentions the word “sin” is Romans 3:23. However, to understand what “sin” means in Romans 3:23, one must look at the context in which it is found, specifically, Romans 2:1-3:31. Here, Paul dealt with the judgmental attitudes that came from both Jewish and Gentile Christians which was causing disunity in the church. The Jewish Christians were proud of the fact that they were God’s chosen people and had been given the law by God. Paul did not seem to have a problem with this. The problem was that because the Jewish Christians believed they were God’s chosen people, and if they had been given the law, then they believed they must be above the Gentile Christians in God’s eyes. No longer was the family of God based upon ethnicity but instead based on the saving work of Jesus by defeating sin. Paul hoped he would get the church’s attention and to help them remember they were both on level ground, that through humility they could find the common ground to be the family of God they had been brought into.

Second, when one reads the word “righteousness,” it means how I am made right with God or how I live and conduct my life in a such a way that is pleasing to God. While righteousness has an individual understanding, it also has a corporate understanding which is many times missed, especially when read through a systematic lens. The practical concern is not the way a person becomes righteous but rather that by faith, regardless of whether a Jew or Gentile, a person enters and becomes a part of God’s family.

Romans 14:1-15:13, gives a practical example that illustrates the way in which division was taking place in the church: which is during table fellowship. The members of the church at Rome had been too busy judging one another based on what they were eating that they were missing the bigger picture. God’s kingdom was not about what they ate when together but rather the reason they were together in the first place. They were there because of the work of Jesus through death and resurrection. Therefore, they were not to define themselves in terms of what they ate or drank, or other cultural norms, rather they were to define themselves using the term “righteousness.” When one enters into the kingdom because of the work of Jesus, they are now a part of the community, or more specifically, they are part of the family of God and the people sitting around the table with them are members of the same family, the family of God.

The reason I began to read Romans in this light is because in two previous church context that I had been a part of, the churches struggled to find unity in diversity in one key area: worship. In these previous settings, I was the associate pastor and preached in both settings. Both churches are United Methodist and range in size from 200 to 400 people who worshiped on a Sunday morning (this is combining the total people of both traditional and contemporary services). In these previous settings, there had been tension and conflict in the church based on the different worship styles that were offered. Many times, this brought hard feelings between different people and in many cases, people have felt as if the church was divided and was really two churches in one. I needed to find a process by which I could discover what was the root cause of the disunity and to address the issue biblically, in this case to show how a church in Paul’s day struggled with diversity and what principles or teachings were used to bring unity in the midst of diversity. I needed a way to read both Romans and the church through a pastoral theology lens. 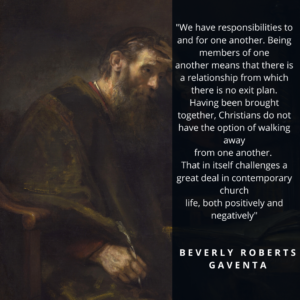 In the book, Practical Theology and Qualitative Research, John Swinton gives a four-step process in which one can do pastoral theology but is also a lens to read the letter of Romans and eventually to see the churches struggles through a pastoral theology lens. The first step in Swinton’s process is what he calls the “Current Praxis” where the question one asks at this stage is, “What appears to be going on?”[1] The second step of Swinton’s process is called “cultural and contextual analysis” and the question that is asked here is “What is actually going on here?”[2] In the letter of Romans, this is where one does the historical critical research into understanding the situation at Rome.

The third step in Swinton’s process is, “theological reflection,” in which “we begin to reflect on what we have discovered from a theological perspective.” It is not that theological thinking has been absent from the first two steps. Rather, it is in step three that, “we begin to develop the conversation by drawing out the implicit and explicit theological dimensions of the situation.” It is here that one asks what are the “critical reflections on the practices of the church in light of scripture and tradition.”[3]

Why is this important? The church is a complex community comprised of people from many different backgrounds and ideals. When people come together in a church community there are bound to be conflicts. Conflict will take place between individuals, groups of people or segments of people who have differences of opinions. By using Swinton’s steps, I believe that conflict can be recognized and diagnosed and that the underlying principals, those issues that are beneath the surface can be discovered and brough to the surface. Then by reading Romans through a pastoral theology lens, principals can be discovered that can help churches in conflict find unity in the midst of diversity.

Through reading both Romans and the church through a pastoral lens I discovered two things. First, I discovered the root issue of what was causing the division. It was more than just music or setting but it was fear, fear of what traditions could be lost by those who were in the traditional service and fear of losing new traditions that were established and developed through a contemporary setting.

Second, by understanding the root issues at the local church level, I could then create a sermon series using the letter of Romans, to show how the church at Rome struggled with many of the same issues and then present principles by which Paul helped the church move forward and find unity in diversity. This sermon series would be based on re-defining key words, such as “sin” and “righteousness” through a pastoral theology lens and then use these words as the topics for the sermon series. 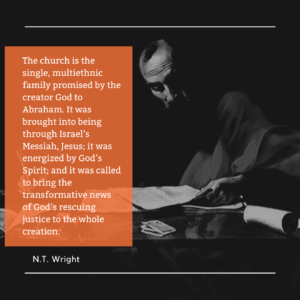 There are some future steps that I have not yet undertaken that I could see happen with this project. One step is to look at other key words in Romans and redefine them considering a pastoral theology lens. These words could include “salvation”, “gospel” or “justification.” This would be helpful in developing a deeper pastoral theological reading of Romans as well as a deeper preaching series.

A second step would be to identify issues that cause disunity in the church, such as church programs that are in conflict with one another or even pastoral staff that is in conflict and by using this pastoral theological process and the letter of Romans find new principals and solutions to bring about unity in times of disunity.

2 Replies to “Unity in Diversity: Reading Romans Through A Pastoral Theology Lens”