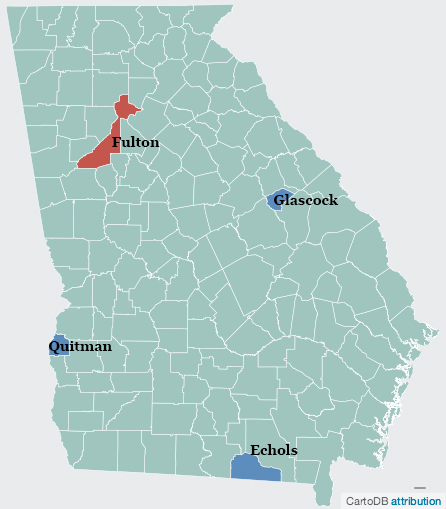 As you may have gathered from the previous map, the county unit system heavily favored rural areas over urban areas. For example, Georgia’s three least populous counties in 1950 – Echols, Quitman, and Glascock – each counted for six unit votes, the same as the most populous county, Fulton. In other words, the 9267 people of these three counties had the same electoral weight than the 473,572 residents of Fulton County.

As a result, candidates for state-wide offices usually focused on smaller counties in their campaign. This has tremendous impact on which ideas and policies predominated in the Georgia legislatures.

Indeed, progressives and African Americans, both of whom tended to reside in urban areas in the 1950s, had little power in this system. In turn, conservatives and white supremacists, who usually dominated rural counties, enjoyed tremendous power. More than simply tilting the ideological balance toward the conservatism of rural white voters, this system failed to provide any incentives for politicians to enact policies and legislation that favored booming urban areas like Atlanta.