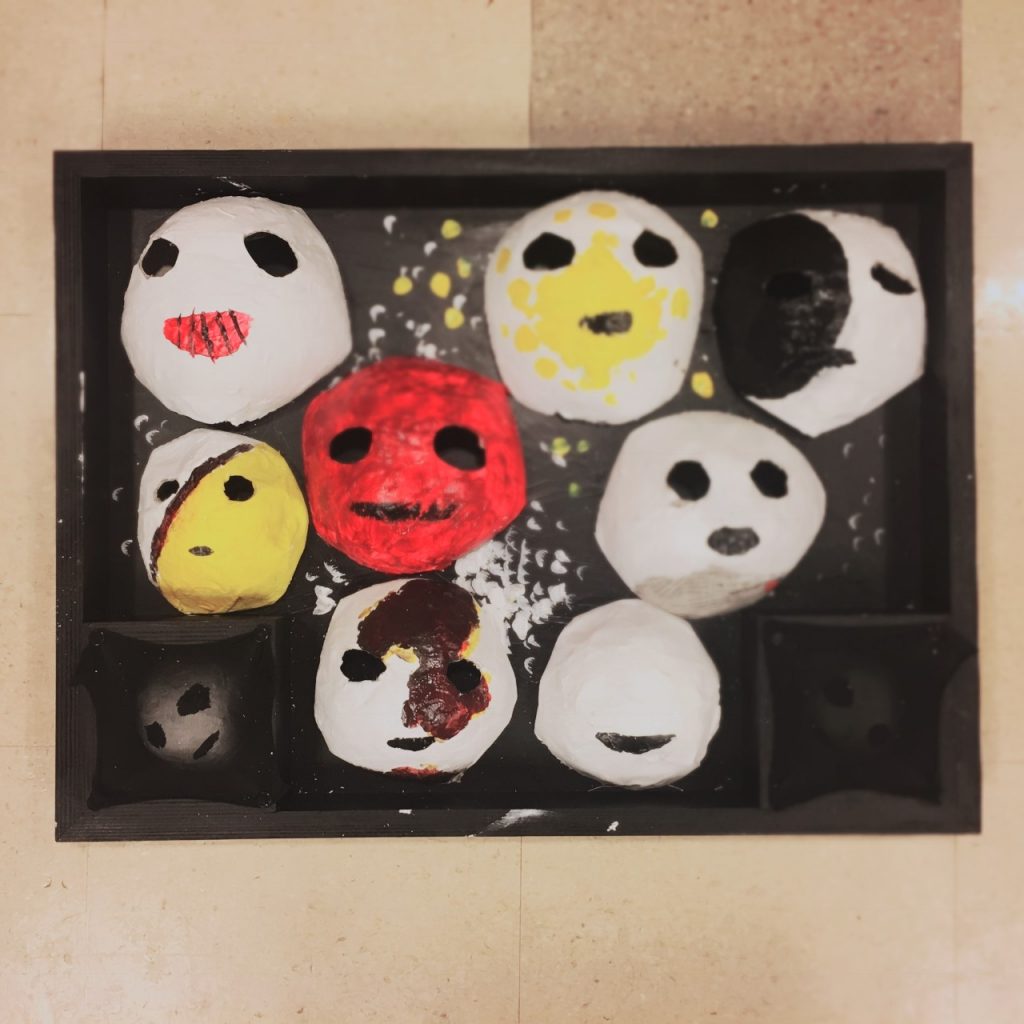 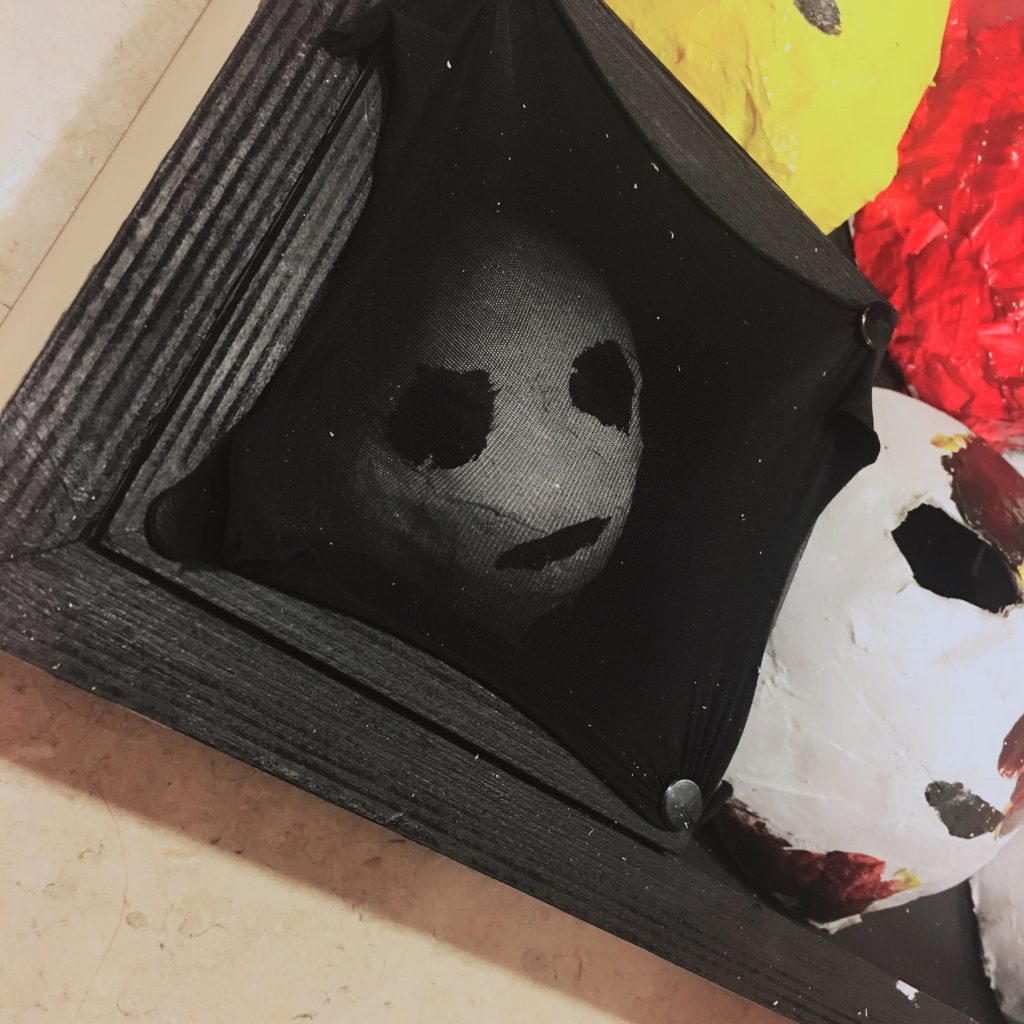 In the poem “Carnival”, Rebecca Lindenberg uses extensive visual description and analogies to construct the overall vivacious yet hollow atmosphere by focusing on the themes of disguise, artificiality and the loss of identity.

In this poem, there is minimal description of action aside from the extensive depiction of the physical appearance of the masks. Although the title suggests that the poem describes a carnival, there is no actual indication of specific events or environment. Furthermore, since the lines of descriptions are extremely uniform and concise, there is a sense of detachment of the author from the poem, making the poem similar to an inventory list rather than a work of literature, stripping the poem bare of any humane and emotional aspects.

The overall structure of this poem juxtaposes consistency and fragmentation. Since the poem is made up of only one stanza, there is a sense of wholeness throughout the poem, bring the descriptions together and marking them as a complete event. Although the uniformity of length among individual sentences creates an overall regular and static visual perception, the juxtaposition at the end of each line creates a break within individual sentences, disrupting the flow of the poem, which, together with the natural stops among the short individual sentences, creates a sense of precariousness and fragmentation despite the poem’s visual consistency.

The lack of individual focus in the poem further emphasizes the idea of disguise. When Lindenberg describes the masks, although she used particle “the” in almost every line, the only identification that matches the specification is the visual portrayal. This limitation emphasizes the contrast between the gaudy decorations on the surface and the hidden void beneath the masks. Also, the  passive voice in the poem instills autonomy to the masks, while the wearer of the masks are left out of the description, signifying the masks gradually takes over and eventually becomes the identity of the bearer.

Since the poem focuses on the idea that the masks takes the place of the identity of its bearer, the main subject of this visual translation of “Carnival” is, instead of actual people in the carnival, the masks they are wearing. This translation is a combination of one 24x18x1.5-inches and two 5x5x1.5-inches gesso boards and papier-mâché masks. The masks are made individually in slightly different sizes to indicate the sense of depth in the field of view of the carnival. Then, the masks are painted white with thick acrylic paint and then on which details are added according to the description in the poem. Since acrylic paint is generally considered an industrial material, it relates to the theme of artificiality in this poem. Also, acrylic paint gives the surface a glossy finish after it dries but also preserves the brushstrokes, which means it is able to preserve the materiality and synthetic aspect of masks, while the shape of masks and the glossy surface echoes the anthropomorphic aspect given by the wearer of the mask.

On the three gesso boards, I used the backside of all three boards as the main medium to suggest the idea of a hidden side of human. On each of the board, the surfaces are covered with thick mars black acrylic paint to represent the “night” mentioned in the original poem. The larger panel is used to represent the whole scene, while the two smaller panels represent the last sentence of the poem that describes the two masks “that renders lovers identical with night.” The two smaller panels are inserted and affixed to the two lower corners of the larger panel to correspond with the sentence’s physical location in the poem, while the symmetry echoes with the word “identical” in the line.

On the larger panel, the masks are placed and attached to the surface so that the overall picture feels crowded while no mask is in physical contact with another, representing the lively atmosphere of the carnival in appearance as well as the fragmented and distanced relation among people underneath the surface. In the two smaller panels, two identical masks are placed to achieve approximate symmetry, further emphasizing the idea of “identical” existences rendered by the masks. Finally, the openings of the two smaller panels are covered by two squares of translucent black cotton, so that one can barely see the masks inside through the fabric. This echoes with the description of masks making the lovers identical “with night” by physically assimilating the perception of the masks color and the color of the background, while further indicates a sense of disguise implies throughout the poem.

Lindenberg’s “Carnival” puts its focus on the visual, sensual and tactile description instead of specific actions or individuality. The carnival symbolizes the greater picture of life, and those wearing masks are those who covers their true identity with their deliberately fabricated facade, and as time passes, the masks replaces their own identity. In this visual translation, instead of a realistic replication of the original poem, I chose to further emphasize the sensual, textual and visual aspect as Lindenberg does in her original poem, by using a variety of materials and techniques and depict the duality and precariousness of human identity.