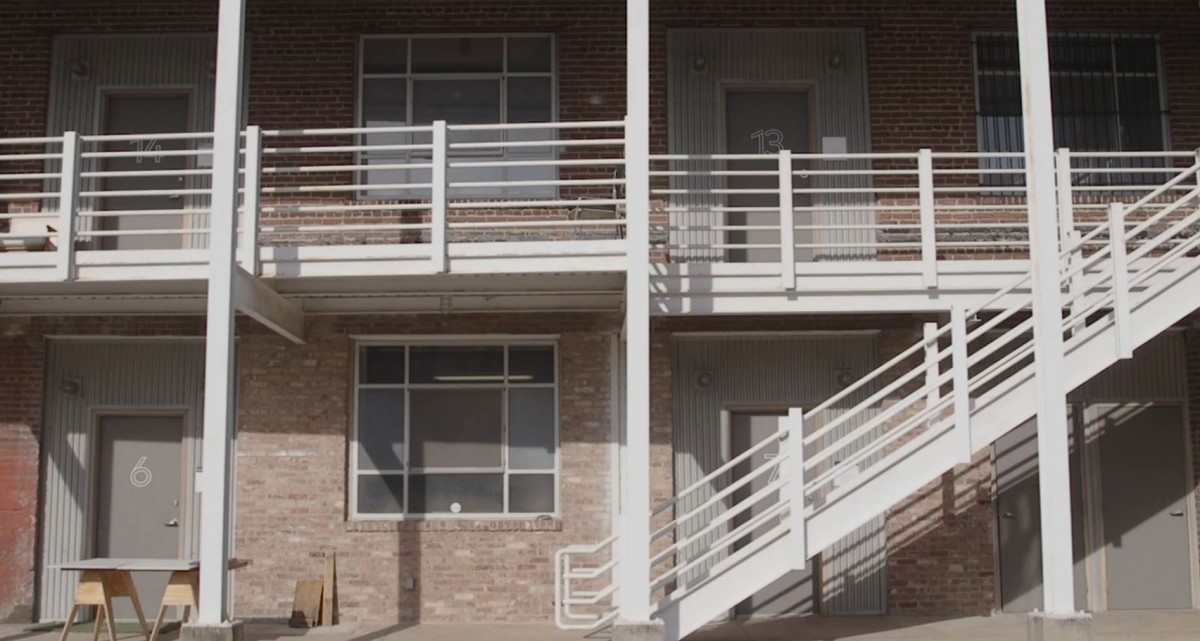 Seated in a corner of his small studio, Dana Haugaard goes to work, his blade cautiously scoring concentric circles into thin bands of painter’s tape. The tape, set over an asymmetric mirror tile, will act as a barrier from the vibrant paint clouds Haugaard plans to conjure soon. The artist has generously offered to guide us through the process of manufacturing one of his newest creations: a series of mirror installations that invites viewers to think about how they exist in physical spaces. The brightly-hued rings on the mirror allude to environment and sound and attempt to incorporate what would otherwise be reflected (ourselves, our surroundings) back into the work. But before producing his colorful configuration, Haugaard painstakingly removes fine strips of tape from the surface. We watch quietly as the spaghetti-sized spirals grow into a mound beside him.

On another morning in the Rose Library, shortly into the filming hour, Pellom McDaniels III inspects the many artifacts that surround him. He’s about to describe each in detail but first spends a moment to introduce his role. He follows with a pause. The sustained silence and solemn look invites us to lean in. McDaniels cheerfully disrupts, “Did you know that?” His hearty laugh is a delightful surprise captured on camera. McDaniels then dives into his research, enlightening us on the magnitude of the cultural objects he’s brought with him; they collectively reveal the struggle of African-American identity in a pre-abolitionist era. Comparing texts, McDaniels discusses with deep admiration how authors, including David Walker and W.E.B. Du Bois, used “their intellect to make an argument against this institution [slavery] that made beasts of people.” His handling of these artifacts, particularly his reading of Walker’s Appeal, a rare and noted anti-slavery text, is delicate and purposeful.

Both Dana Hauugard, lecturer of visual arts in the Art History department, and Pellom McDaniels III, curator of African American collections in the Stuart A. Rose Manuscript, Archives, and Rare Book Library, have taken part in the video series, Take Note. Produced by Teaching & Learning Technologies’ Academic Production Team, the series gives viewers an exclusive conversation that taps into the research, workspace, artifacts, and mindset of Emory University’s scholars.

Begun in the fall of 2018, Take Note was an answer to the challenge of a growing campus with an equally growing need for connectedness. Tremendous volumes of scholarship take place at Emory with often little interface across its disciplines, buildings, people. To counter this seclusion, the Academic Production Team sought to create videos that explore and uncover the research occurring on campus. The series attempts to transform the relationship between viewer and subject, going from strangers to familiars by providing a personal approach to meeting the scholars and educators of the Emory community. We get more than a glimpse at personality and inner dialogue through every sigh, laugh, and meditative gaze.

Each episode pieces together a journey of discovery, action, and reflection. While discussing what their work means to them as creators and curators, we see closeups of hands working their craft. A makeshift compass and wall-mounted wheel rotate rhythmically as Haugaard produces one of his mirror pieces from start to finish. A string of steering wheels are rapidly turned along rows of archival shelving, giving passage for McDaniels to the objects he’s charged with. With both researchers, these moments on film provide viewers with a “day-in-the-life” experience. Rejecting the formality of an interview and the stiffness of a lecture, we instead experience their work how they would. In one scene, McDaniels gently glides his fingers over the edge of an antique daguerreotype dated nearly two centuries. He seems to resist the temptation of the plush and richly-colored fabric inlay that rests inside.

The way in which these scholars literally and figuratively handle their research is an education on how to appreciate the scholarship at our fingertips, not take it for granted, and indulge in the possibilities here in Emory’s community.

To view Haugaard’s and McDaniels’ videos, check out the YouTube playlist.

For more information about or interest in being featured in the Take Note series, please visit our website