The 1950’s film noir Gun Crazy, starring John Dall and Peggy Cummins, is a novel take on the familiar crime-spree romance. The film was directed by Joseph H. Lewis and written by Donald Trumbo, then a blacklisted Hollywood writer due to his alleged Communist leanings. The combination of these two formed a peculiarly prescient portrayal of America’s obsession with firearms. In this film, man and wife are united by their mutual fascination for firearms, and the notoriously adventurous couple entertains its viewers with tales of misguided love and nonstop action in anticipation of a tragic ending. However, Gun Crazy is more than just another Bonnie and Clyde ripoff. On how he elicited such passionate performances out of Dall and Cummins, the director proclaims,

I told John, “Your ****’s never been so hard,” and I told Peggy, “You’re a female dog in heat, and you want him. But don’t let him have it in a hurry. Keep him waiting.” That’s exactly how I talked to them and I turned them loose. I didn’t have to give them more directions.

Throughout the years, the film has achieved cult status through a particularly savage portrayal of the femme fatale in Annie Laurie Starr, the blonde bombshell with an explosive past, who astonishes the viewers no less due to her tantalizing introductory sequence than her pinpoint accuracy with a pistol.

As shown above, Laurie attracts the attention of a man in the crowd, Bart Tare – his own past littered with gun-related incidents. The two quickly hook up, despite the following ominous warning to Bart by a fellow coworker: “She ain’t the type that makes a happy home.” They marry in a roadside chapel and start a nomadic life together. 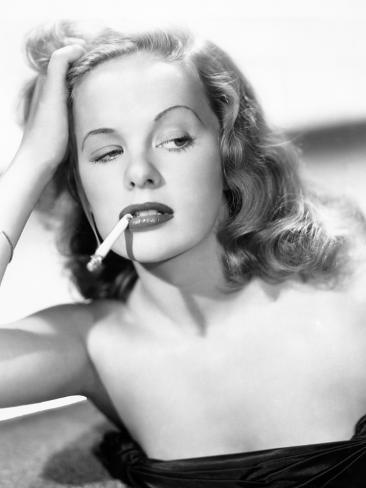 Pictured: A face that screams “innocence”

But soon there is trouble brewing in the gunslingers’ paradise, as their honeymoon is interrupted by Laurie’s sudden desire to get rich quick, and she believes her new lover to be the sort of man who could help her finance a glamorous lifestyle. She convinces a hesitant Bart to pull off a series of impromptu robberies relying on their uncanny skills with a handgun. Thus, the film devolves into a frantic string of stick-ups and police chases, a slight deviation from film noir standards. Instead of worrying himself with establishing the correct somber tone, Lewis provides the audience with a steady stream of action and romance. The “tone” viewers are left eschews melodrama or sentimentality – even reason – in favor of a frenzied love affair. Instead, the primary goal of this onscreen partnership, aside from showing us sweet sociopathic love in its full rapture, is to thrill.

Their firearm-based priorities diverge when Laurie begins to purposely shoot to kill. Although Bart is disenchanted, once again, Laurie is able to sweet talk him enough to ease his concerns. This time she assures him that she only shoots when she gets scared, almost as if she were placing the burden on Bart to shield her from being frightened by taking on her homicidal role in the relationship. After one last elaborate heist, they agree to go their separate ways until police interest in their case dies down, but their magnetic infatuation with each other draws them together for the last time. For Bart, Laurie is the kind of woman for whom any transgression can be forgiven, yet he is not rewarded for his unfailing loyalty.

A far cry from the Hollywood Laurie had envisioned…

Wet, muddy, exhausted, and now struggling to prolong their last hours of freedom, they lie together and embrace on a marsh in a final attempt to elude police. Here, there is a stark contrast between the glitz and glamour that originally was the object of Laurie’s desire and their present situation of being, quite literally, stuck in the mud (occasionally face-first, in Laurie’s case). Finally, facing her imminent capture, she reveals her true killer nature as she tries to make one last stand. Unfortunately, she never pulls the trigger because Burt, as one would do to a vicious animal, ultimately pulls the trigger on her before succumbing to police fire himself. Fittingly, Burt dies in his hometown, near the same backwoods where he once honed his shooting fixation and next to the woman who turned his former hobby into a death sentence.

This is the sort of dark, doomed romance that characterizes the film noir: the solace of knowing that true love can conquer death. However, in Gun Crazy, the couple’s reckless behavior does not intrinsically suggest death as a possibility, but instead presents it as virtual inevitability. While their brazen heists, violent police confrontations, and daring escapes illustrate the lovers’ deftness in gunfights and flight, the relationship of mutual dependence clouds their judgment and becomes incompatible with the successful continuance of criminal endeavors. Burt’s inability to detach himself from Laurie, as well as the latter’s inability to detach herself from violent crime, essentially seals their fate as dumb-in-love fugitives whose lone comfort when at the brink of death is having each other in their arms. As film historian Arturo Silva notes, “Bart and Laurie create their world, and they explode it in a death coda fittingly set in a savage and poetic landscape.” The kiss, rob, run, repeat cycle proves to be more straight line than circle and, much to the lovers’ chagrin, cruelly abbreviated.