I chose the name of the river clear picture because everywhere green, looks really comfortable! I also like the old building from the painting. Natural environment and scenery so I packed them were happy ☺

When I read the description of the painting, I understand: painting depicting the Northern Song capital Kaifeng, bustling streets and lively scene near the river on both sides and beautiful natural scenery. Works in scroll form, complex and varied landscape into a unified picture. Drawn mainly divided into two parts, one part is rural, is another bazaar. Some paintings, livestock and more horses, boats boats, house building more buildings, vehicles, car roof, trees and more trees, different clothing exchanges, and looked different life.

I especially like how this hatch in great detail. Each have different clothes, each tree has a different color. I can see people’s lives, their traditions and excitement of the city! 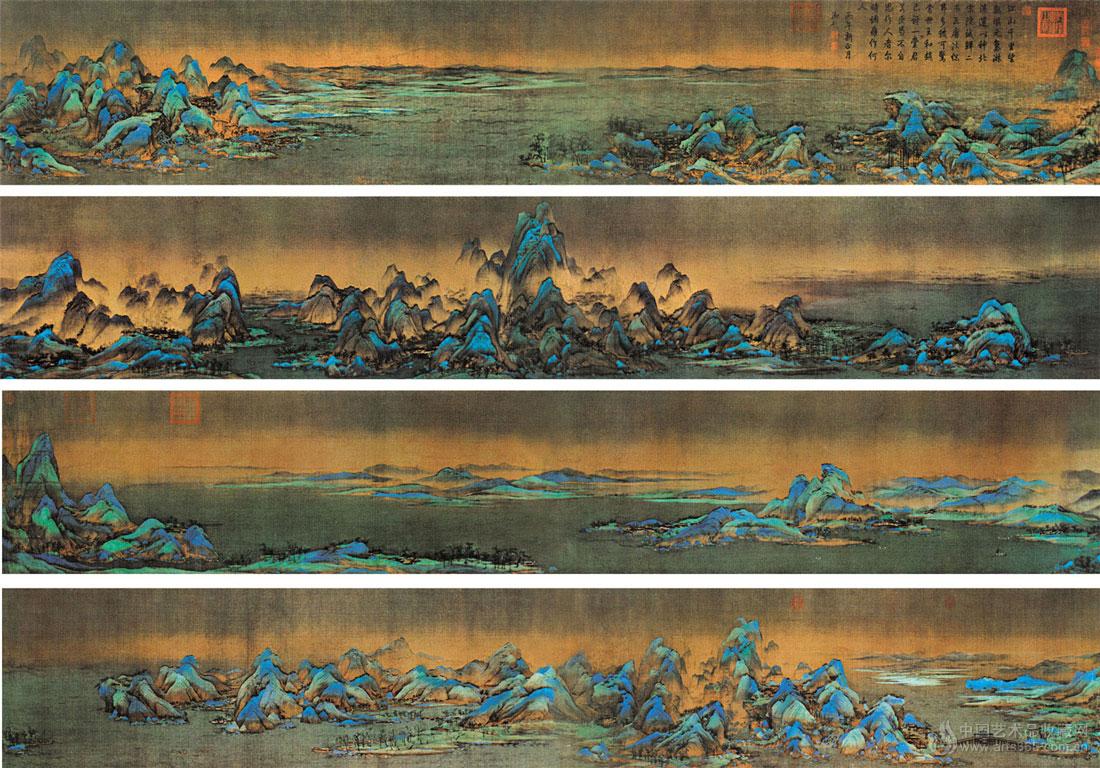 Wang Ximeng’s A Thousand Li of Rivers and Mountains

A Thousand Li of Rivers and Mountains is an extremely big painting. As a matter of fact, this painting is one of the largest paintings in Chinese history and one of China’s greatest artwork.  Wang Ximeng painted on silk. In addition, he used rich colors of ink. The background of A Thousand Li of Rivers and Mountains is a dark gold color. Not only does this hand scroll have a lot of blue-green, majestic mountains, but it also has lakes, villages, bridges, trees, boats, and so on. If I were in this picture, I would want to explore the landscape. For example, I would want to climb the majestic mountains and sail across the lakes. I think this painting gives a solemn, dignified emotion.

Wang Ximeng painted A Thousand Li of Rivers and Mountains in the year of 1113. When he finished painting this artwork, he was only eighteen years old. Unfortunately, Wang Ximeng passed away when he was only twenty-three years old. Wang Ximeng was known as a prodigy and was the most renowned painter of the Northern Song Dynasty. Emperor Huizong actually personally taught Wang Ximeng. Because Wang Ximeng is known as an art prodigy, I wanted to study his artwork. Also, I wanted to study Wang Ximeng’s A Thousand Li of Rivers and Mountains because I think this artwork displays ancient China’s beautiful scenery.

Wang Ximeng is one of the most famous Chinese painters in Song Dynasty. In 1113, he painted thousands of miles of rivers and mountains, when he was eighteen years old. I chose “A Thousand Li of Rivers and Mountains” because Wang Ximeng’s paintings left me with the deepest impression. I love beautiful scenery that he depicted in the painting. If I am at the place in the painting, I would like to take many pictures.

At first glance, the painting just depicts beautiful landscapes of China. Wang Ximeng depicts China as a prosperous and powerful country. His use of gold color emphasizes wealth and royalty. However, taking into account the historical background of the painting, the painting is actually a lament former glory of China. Therefore, Wang Ximeng’s painting gave me the feeling of both beauty and lament. 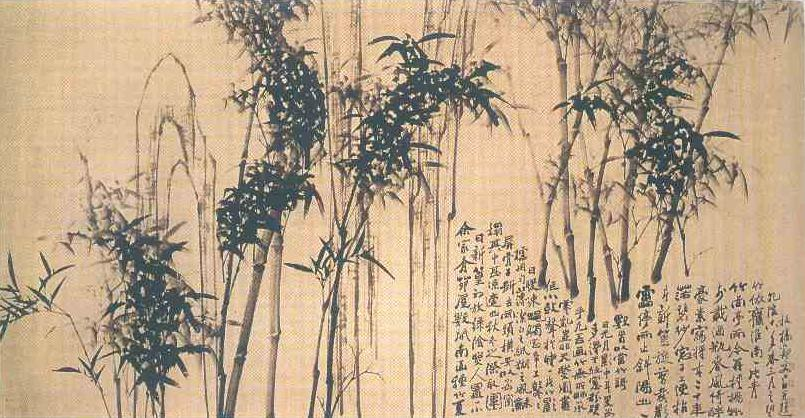 Take a look at this picture, so nice! A famous Chinese painter by the name of Zheng Xie drew this painting. His painting is made up of only bamboo, but it tells a story. As you can see, the picture doesn’t have much color’ the bamboo is colored black, and the tan background makes the painting very simple, yet so beautiful. Zheng Xie painted the bamboo to look very tall. In my opinion, I don’t think bamboo is very tall, so perhaps Zheng Xie wanted to draw this painting from the perspective of a young child. Because children are so small, to them, everything looks very tall. Moreover, the picture is very peaceful. There aren’t too many things in the painting, so when people look at this painting, there aren’t many things distracting them. I think this painting depicts nature very beautifully; I like to go out to nature and meditate. Perhaps, Zheng Xie wanted to meditate in nature too when he drew this painting. I think the emotions Zheng Xie wanted his viewers to be reminded of is that of serenity and happiness.

In summary, I thing Zheng Xie’s painting is very beautiful. He used the simple essence of nature to create a very beautiful picture. However, you may wonder who Zheng Xie is? Please allow me to tell you a bit about him: Zheng Xie was a Chinese painter from Jiangsu. A lot of people know him from his more commonly used name, Zheng Banqiao. His family didn’t have a lot of money, but he was a very hardworking person. He made sure to continue improving his grades and testing, until one day he became a magistrate in Shangdong. However, he resigned after some problems arose. After his resignation he used art to express himself. He especially loved drawing things in nature such as orchids, stones, and bamboo. This picture of bamboo is one of his most famous.

A Thousand Li of River and Mountains

“A Thousand Li of River and Mountains” is one of my favorite paintings. This painting not only has different colored mountains, but also but also many other things, such as a small boat, many people, some houses, and so on. Compared to other famous Chinese paintings, this painting does not have colorful mountains and water in the landscape, but uses ink colors of blue, light green, and deep yellow to portray nature.

I chose this painting because the colors of the painting left a deep impression on me. I not only like the colors used, but also like the structure of the painting. If I had to paint this painting, I would only have some water in front of the mountains. Wang Ximeng’s painting has many mountains, and he paints water not only in front of them, but also behind with boats, people, houses, and so on. Thus, the mountains look as if they are in the middle of the water, and there is a very good representation of the mutual balance between the landscape and the people. This picture makes me think, when painting, I should also use some more imagination. This painting also makes me more interested in Chinese paintings.