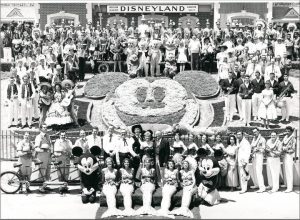 July 17, 1955: On a sunny Anaheim, California Sunday afternoon, Walt Disney opens his first theme park, Disneyland. Offering 5 theme lands with 18 attractions, the park took more than twenty years to plan and cost $17 million to build. Disney’s financial advisers were skeptical of his plan, suggesting that it would be a disaster, but Disney pressed on with his plan, using funds he borrowed against his life insurance policy as well as money raised from selling vacation property. Under pressure to deliver his vision to naysayers, he pushed to have Disneyland completed within only one year and one day after construction began.

During the opening day, actor Ronald Reagan, who would later become president, introduced Walt Disney, and the original Mouseketeers made their debut in the inaugural Main Street parade. Within seven weeks of being open, Disneyland surpassed 1 million visitors.

Read more from our collection: