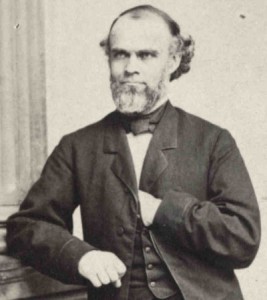 December 8, 1812: Henry Varnum Poor was born on this day and would lay the groundwork for the business information industry. As the editor of the American Railroad Journal, he became aware of the ways that businesses across states were becoming increasingly interconnected. Managers found a lot of value in information about companies and economics in partnering states, so he founded H.V. and H.W. Poor Co. with his son and compiled massive amounts of business information into Poor’s Manual of the Railroads of the United States in 1869. In 1941, his company merged with Standard Statistics Bureau to form Standard & Poor’s Corp.