I never thought I’d have to google translate the word for nit to explain to a German woman how I’d unintentionally infected her home with lice, but there I was, doing just that.

I’d been working at a kids’ summer camp in Clarkston, Georgia; carrying this kid and that kid on my back around the playground. Not surprisingly, but unbeknownst to me at the time, the sweet children gave me lice. 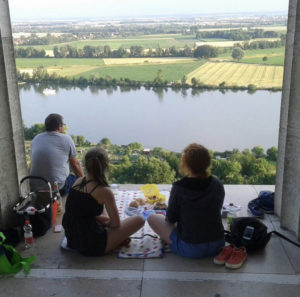 A picnic overlooking the Bavarian countryside with Angie and her parents

It was nearly a month later when I realized, and by that time I was in Straubing, Germany; a

remote town in the Bavarian countryside. I was visiting my friend Angie, who I’d met two years before when my high school did an exchange program. Her mom searched my head quickly, and declared that I just had dandruff; Angie acting as translator throughout.

I knew I had lice. I knew it. In two days I was leaving Angie’s family to go to Berlin for a month long study abroad program, so instead of trying to argue with Angie’s mom – who did not speak good English and I did not speak German – I let it go. I would figure it out in Berlin.

My Berlin host mom was named Monteserrat and she and her nineteen year old daughter Dena were heavenly. Monteserrat also didn’t speak much English while Dena did, but our dynamic was entirely opposite of that of Angie and her mother. We all spoke German; always, with few exceptions. At first, my German was shaky; I wasn’t confident in my abilities and it took me awhile to pull the words I knew from my memory.

Still, Monteserrat was patient and encouraging. Even when I admitted my lice problem with poor German, she kept her cool, which is more than I could’ve said for myself if I had been in her shoes. 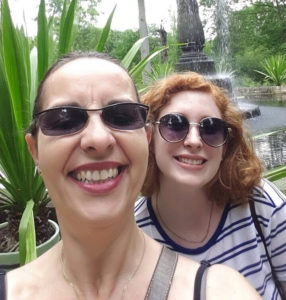 Monteserrat and me on a day trip to Pfaueninsel – Peacock Island

Throughout the month, after I got rid of the lice, of course, continually speaking German caused my confidence to grow exponentially. Repeating the same sentence structures, and hearing them returned, drilled them into my memory. I was also taking German classes during the program which assisted my success, but they in no way compared to communicating with my host family. I realized that I could take as many German (or Spanish, or any other language) classes as possible, but nothing would educate better than immersing myself in the culture of my target language. Out in the world, problems are thrown at you which no practiced class conversation can prepare you for – like confessing a lice infestation. Yes, it was stressful, but my language skills are stronger for it. I’m stronger for it.

As well, study abroad experiences can offer students more than just the opportunity to immerse themselves in their target language. With Angie and her family, I didn’t speak any German. I should have, and I missed out on that chance to push myself. Nonetheless, Angie and her family showed me a culture different from my own, which sparked my interest. From there, my excitement to learn more German, to visit again, to learn more about other languages and other cultures skyrocketed.

Study abroad takes foreign language students out of the classroom and into the community, where they can struggle to communicate and experience cultural differences, to expand their language skills and their knowledge of the greater world.