When I began self-studying Korean in high school, I was thrilled to use my broken language skills to connect with people in local Korean communities. Though I enjoyed the opportunity to speak with members of the Korean community, our conversations were comfortably padded by English. All of the Korean people I met in the US could speak English with far higher proficiency than I could speak Korean. However, when I arrived in South Korea to study abroad for a year and live with a Korean host family, learning Korean took on an entirely new meaning in my life. In Seoul, the majority of the people I met did not speak any English like the Koreans I met in the US. I had no English cushion to lean on. Korean was no longer a hobby which allowed me to better understand my favorite TV dramas; rather, learning and speaking Korean became an essential aspect of my daily life and survival in the totally new environment of Seoul.

When I first came to Seoul, everything seemed unfamiliar and foreign. The signs appeared to be scribbles of lines and circles, the streets were filled with indistinguishable chattering in a language I did not understand. Food menus and subway maps were not only incomprehensible, but also inspired dread as I had to quickly figure out what to tell the waiter or which direction to go on the train. However, over the following months, I learned to read those circles and lines. I first learned to sound-out those scribbles and then learned what each of those words meant. Little-by-little, I started to make out what the man on the subway was complaining to his wife about and what the teenagers standing by the door were laughing about. The most difficult part of going to a restaurant shifted from understanding the menu to choosing from all of the delicious food it contained, and the subway became my most cherished tool for exploring Seoul and beyond. 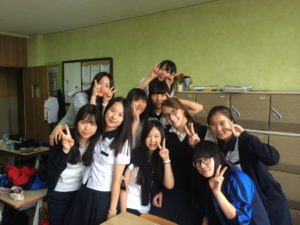 My friends from class at my Korean high school!

Studying abroad forced me to become comfortable with being uncomfortable. Before I could learn Korean and integrate into Seoul society, I needed to learn to navigate discomfort and unfamiliar terrain with patience, persistence, and good humor. Studying abroad did not just advance my language skills; it allowed me to use my language skills to connect with Korean people and better understand my host culture as I was immersed in it. I left Seoul not just a better Korean speaker, but as a more culturally-aware global citizen who feels confident in my ability to solve problems, connect with others, and navigate unfamiliar terrain. Finally, studying Korean in Korea transformed a place and people from the alien to the familiar, giving me a second home which I would have never previously expected. 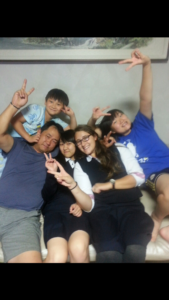