“The statement should be a 1 page narrative that provides a picture of yourself as an individual․ It should deal with your personal history, family background, influences on your intellectual development, the educational, professional, and cultural opportunities (or lack of them) to which you have been exposed, and the ways in which these experiences have affected you․ Also include your special interests and abilities, career plans, and life goals, etc․ It should not be a recording of facts already listed on the application or an elaboration of your Statement of Grant Purpose․ It is more of a biography, but specifically related to you and your aspirations relative to the specific Fulbright Program to which you have applied․”

There are two main things that I look forward to learning about on a daily basis: foreign language and biology. As a child, my mother enrolled me in an immersive Spanish program in school. Initially, she expected me to hate it; much to her surprise, I came back gleefully regurgitating all of the words I had learned from the day. I haven’t stopped taking Spanish since. In college, I decided to take my love for foreign language a step farther and pursue learning Portuguese as well. I knew from a young age that I wanted to enter the science field, and I quickly realized that foreign language had to be involved somehow as well. I hope to someday combine these two interests in my career; I would like to be a medical doctor “without borders.”  Although those two subjects are my main passions, I love learning about anything and everything, and I am aware that some of the best lessons are not learned academically.

One of the most influential experiences I’ve had was at a local free clinic. The clinic needed Spanish-speaking volunteers; approximately 90% of the clinic’s patients were Latinx, with Spanish as their native tongue. Only about 12% of the doctors could speak Spanish, however. As a Spanish and Portuguese student with a passion for the medical field, I knew the opportunity was one I could not resist. Upon arriving at the clinic, I quickly realized that speaking/listening to a foreign language in an academic setting is much different than speaking/listening to a foreign language in the “real world.” Although the task was initially overwhelming, the challenge ultimately exposed me to a wide variety of new vocabulary and prepared me for real-life application scenarios that I am likely to come across as a professional in the medical field abroad. Perhaps most importantly, the experience allowed me to connect with my local community in significant ways that I otherwise would not have been able to do.

My “real-life” experience in the clinic inspired me to apply to a study abroad in Lisbon, Portugal. After listening to various Fado performances and learning about Portugal’s restrictive past under António de Oliveira Salazar’s ruling, I was inspired to conduct research on the relationship between Fado music and the Estado Novo regime in 20th century Portugal. After researching the complex history of Fado music in Portugal and its relationship with politics over the years, I realized that there is so much more to explore about the topic than a simple undergraduate thesis could cover. Fulbright would give me the invaluable opportunity to continue my research while also developing Portuguese cultural and linguistic knowledge. The experience would allow me to be a better and more qualified candidate for my future career; most importantly, it would broaden my horizons, expand my knowledge on critical historical events, and enable me to connect even more to Portuguese-speaking communities. 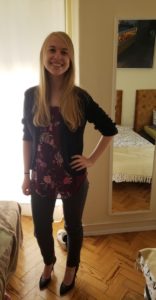