Prompt: Who are you and why should you receive this grant/scholarship?

Program-Specific Prompt: “The statement should be a 1 page narrative that provides a picture of yourself as an individual․ It should deal with your personal history, family background, influences on your intellectual development, the educational, professional, and cultural opportunities (or lack of them) to which you have been exposed, and the ways in which these experiences have affected you․ Also include your special interests and abilities, career plans, and life goals, etc. It should not be a recording of facts already listed on the application or an elaboration of your Statement of Grant Purpose․ It is more of a biography, but specifically related to you and your aspirations relative to the specific Fulbright Program to which you have applied․”

For someone who has actually never been abroad, I have a great appreciation for foreign languages. Learning a foreign language and culture has been a part of my academic, professional, and personal development for as long as I can remember. I cannot remember a time during which I have not been learning a foreign language. My father studied German throughout middle school, high school, and some of college and had always wished that I follow in his footsteps. Although I did not realize this at the time, my father and I share a similar curiosity for all things in general, which makes learning a language a great, intellectually stimulating adventure. I was most definitely up for the ride.

It is very safe to say that my high school was the place where my addiction for learning foreign languages, particularly German, really sprouted from. There were two teachers of German, both of whom have taught me for many years and with whom I was incredibly close. They took me under their wings and mentored me, increasing my love for the language and culture. One of my German teachers was largely the reason for why I chose to attend Emory for my undergraduate degree, and I am the only student to date that has taken all of the German courses offered by my high school. I was granted the opportunity to take AP German Language and Culture at my high school, an academically challenging and rewarding program that I still value today.

Moving on to my undergraduate experience, I began my collegiate foreign language education strongly with the opportunity to participate in research as a first-year student. Through this experience, I was able to design my own education and learn about topics of interest to me. This also allowed me the opportunity to improve my language skills by being able to speak at a better, more fluid pace in individual meetings with my professor. This experience opened my eyes to many other opportunities to engage with the foreign language community at Emory. I was also invited to apply for the Global Languages and Cultures Cohort in which I engage with other students studying foreign languages at Emory. This experience serving on the cohort has allowed me to interact with students who study languages different from mine and actively reflect on why I chose to study a foreign language. It truly became clear to me that, as a result of my language studies, I am a better, more well-rounded person with skills that are irreproducible in other areas of study.

Studying foreign languages have exposed me to the cultural differences that exist between the German-speaking world and America. Since I hope to become a scholar in philosophy and teach at a collegiate level, I now have a good aim at potential research interests including the philosophy of culture and immigration. This research will allow me to integrate my love for foreign languages and cultures with my love of philosophy and answering bigger questions.

It is no doubt that foreign languages and cultures students gain many valuable strengths and abilities that they can take outside of the classroom into practical use. It is also important to note, however, that many of these strong traits come from different places. What does one learn in an American foreign language classroom? This question is easy to answer, since critical thinking, the ability to analyze evidence, reasoning and communication skills are all beneficial for academic, preprofessional and personal purposes. What one can take outside of the classroom, however, is a question more difficult to tackle. Although one gains helpful experiences in language classes in America, it is often difficult to experience a new culture and practice language since the accepted American language is predominantly English. With this in mind, study abroad experiences come into play.

Natural born American citizens are often spoiled by their upbringing. Regardless of where one lives in the United States, everyone is more than likely to speak the same language and practice similar cultural practices. For this reason, and many others, studying a foreign language and culture in America can be incredibly beneficial since it exposes one to identities and backgrounds that are not one’s own. However, studying a foreign language and culture is vastly different from experiencing that foreign culture.

This summer I am looking forward to traveling to Vienna with Emory’s German Studies department through the “Emory in Vienna” program and I expect it to be extraordinary. One of my goals for this study abroad experience is for my language skills to vastly improve. Although I have been studying German for close to eight years, I have never had an experience where I was truly immersed in the German-speaking world. Since I will have to communicate in German for the most basic of functions and tasks, I expect my conversational skills to improve drastically. These vital conversational abilities, although sometimes the most basic of sorts, are also sometimes the most difficult to teach in a classroom setting. I am also looking forward to the culture shock that comes with living on a new continent among new peers. After learning about the German culture throughout many European countries from an outsider’s perspective, I am thrilled to finally be getting an insider’s view into life in a country that does not prioritize English. I am excited to immerse myself in the culture, whether that is related to the arts, nightlife, traditions, or public transportation in Vienna. I have never experienced anything like it before, and I could not be more excited.

Having a study abroad experience under one’s belt also sets them apart when putting themselves into the job search market. The experience of studying abroad tells an employer that one is willing to challenge themselves, with positive outcomes resulting from that challenge. Studying abroad is surely no walk in the park, for one must feel comfortable placing themselves in an unfamiliar environment with little-to-no people or resources with whom they are familiar. Studying abroad also tells an employer that one is adaptable and can acclimate themselves easily to an unfamiliar environment. Although it seems abstract, these are skills that one obtains through studying abroad are what many employers are seeking.

Every student studying a foreign language or culture should study abroad given the opportunity, and Emory students, in particular, are fortunate to attend an institution that supports and encourages students to explore the world beyond its campus.

It is no secret that language is a foundation of human behavior. Words can help us share our feelings, thoughts, needs, and wants. Notice the word human in “human behavior.” Human beings’ written and spoken language abilities is a main component of what separates us from the rest of the animal kingdom. The value of language skills cannot be ignored.

What makes the human species unique and complex is our ability to comprehend multiple languages. Despite an innate talent for language that all humans share in some capacity, we still experience miscommunications and misunderstandings. This common human struggle is where the study of foreign languages comes into play. Students who study a foreign language will find that, overall, they are more effectively able to communicate in both languages and will find their views expanded and experiences liberalized. To better conceptualize the true usefulness of foreign language study, I’m going to break down Emory College’s definition for a liberal arts education and explain how foreign language studies can be directly applied to each component:

To “emphasize critical thinking, the nature of evidence from multiple perspectives:”

In order to effectively analyze an issue and form a proper judgement, one must be able to think about that issue from multiple perspectives, not simply the perspective of their native society. Studying foreign cultures allows one to do just that. Students will be equipped to think logically about an issue from the perspective of a foreign culture, which is a skill that not many people have. When someone has lived within one culture for an extended period of time (which describes most students of liberal arts institutions), they often are predisposed to certain ideological barriers. These barriers can be detrimental to a student’s ability to think critically, since their views on issues are minimized to the ones that they have been exposed to. Foreign language and culture studies are designed to break those barriers and make the world more interconnected. Foreign language and culture studies also allow for students to be able to interpret different types of evidence from different disciplines, such as philosophy, mathematics, art, fashion, cuisine, and film. Increasing students’ access to various perspectives will aid in making one’s education more well-rounded, appealing to the goals of the liberal arts.

“The ability to effectively reason and communicate:”

One of the things that make human beings unique is our ability to effectively communicate through language. This communication skill is vital for the liberal arts, since critical thinking and communication go hand-in-hand. In order for one to be able to analyze various perspectives, they must be able to reason with those who might represent a foreign culture. Since foreign languages also require more attentive listening (since the language is foreign), this active listening will also apply to the student’s native language, causing for more effective communication. Liberal arts institutions, particularly Emory College, encourage students to study abroad, which provides a continuation and reinforcement for a student’s foreign language requirement. Requiring foreign language studies will make students more comfortable exploring a culture and society different from the one in which they are used to. Foreign language and culture studies will ensure that students are comfortable communicating and behaving in an environment different than their home.

Aside from the above listed benefits, another goal of a liberal arts education is to ensure that students are prepared for post-graduate studies and their future work. Being able to communicate in another language is an advantageous skill to have, since many jobs are created in the United States as a result of foreign trade. People have a higher tendency to migrate to various different countries, which makes the present world of commerce highly global in nature. This global nature will cause students to need to communicate with those in foreign countries effectively.

Emory students should feel fortunate to have the opportunity to extensively study a foreign language. 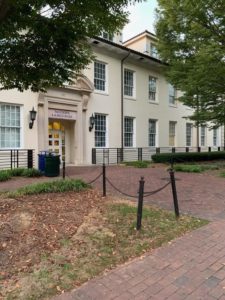 All universities should have a facility devoted to the study of foreign languages, such as Emory’s Modern Languages Building!