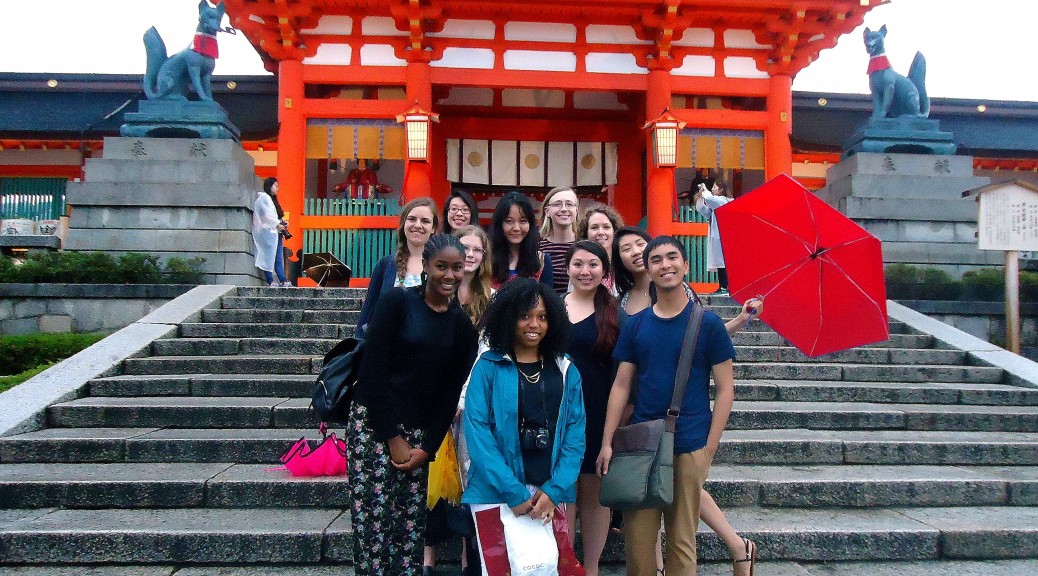 We started our first full day in Japan with a day trip to Osaka. Our volunteer guide, Mr. Akihiro NOMURA (aka “Aki”) helped plan a packed itinerary to keep people moving through a day of jetlag.

In rain that turned to a downpour, the students gamely visited the Osaka International Peace Center (known as Peace Osaka), Osaka castle, and the shopping arcades Dotonbori and Shinsaibashi, before making our way to a train back to Kyoto. On our way back, we stopped at one of the most powerful and beloved Shinto shrines in the area, Fushimi Inari Taisha, and wandered through its many torii (Shinto gates). We parted ways with Aki in the historical Gion area of Kyoto, ate a light dinner, and the students had time to explore the area.

Peace Osaka (see English language pamphlet here) had just reopened from a period of renovations, and we were quite struck by the intentional (new) design of the museum. After a series of two dimensional exhibits explaining the purpose of the museum, the fire bombing raids on Osaka, and other related history, the path through the museum led to more and more immersive, three dimensional, and material exhibits. There were sets of student desks with Plexiglas tops that showed books, memoirs, art, and toys. There was a room showcasing building materials and fire cisterns. After viewing a full-scale replica of a war-era home and its accoutrements, one followed a path through survivor art to a basement room.

Here, in the heart of the museum, were full-size bombs, destroyed remains of the city, a three-dimensional topographical map of the city, and other exhibits. I wandered around the corner and found a to-scale underground air raid shelter. As I peered in the opening, unsure if I should enter, an air raid siren sounded. The shelter grew dark. Then I became immersed in the sounds of the air raids as light, representing fire raging, flickered at the top of the shelter. The raid simulation was protracted and uncomfortable, and I was mesmerized by how fully the museum engaged the senses to convey the horror of the raids. When I emerged back into the light, I was a bit disoriented by the intact, sterile museum. Then I went back around the corner and found myself in yet another air raid, this time using light projection over the 3D topographical map of Osaka I had passed earlier (it was in a static state then)—now anyone standing in front of the wall on which it displayed found themselves immersed in the raid, the light of the fires playing on their bodies.

As a scholar, I have done research in the Peace Memorial Museums of Hiroshima and Nagasaki, but this was my first time entering a peace museum dedicated to the fire bombings. I was disarmed by how similar the images and drawings were to those I’d encountered in the museums dedicated to the atomic bombings. The damage and destruction seemed near-total in all three cities; the difference for both memory and the storytelling, I knew, had more to do with long-term consequences. The atomic bomb museums dedicate significant narrative space to immediate and long-term effects of radioactivity in their efforts not only to remember loss but also to advocate for nuclear disarmament. In Osaka, the narrative focused mainly on loss and rebuilding—though it, too, was dedicated to peace.

Having seen the destruction in the museum, it was unreal, if reassuring, to step out onto the Osaka castle grounds. From the observation deck at the top of the castle, we saw sprawling before us the city now rebuilt to a size worthy of its mercantile history. As we descended through the castle, we were taken through centuries of Japanese history and culture. The students had particular fun dressing in period garb before we left.

We enjoyed lunch at an okonomiyaki restaurant. Okonomiyaki is a symbol of Osaka and the Kansai region of which it is a part. Styled “as you like it,” okonomiyaki is a savory “pancake” with mixed fillings, and the sharing and making of okonimyaki is meant to foster community and goodwill among participants. Ours were cooked on an open grill in front of us, slathered with sauces, and served with a spatula to cut and eat them in true okonomiyaki style at group tables.

After some time in the historical shopping arcades, we headed toward Kyoto to stop at Fushimi Inari Taisha. This well-loved Shinto shrine is dedicated to Inari, the kami (deity) of grain and rice—and therefore prosperity. The shrine complex is huge, but the highlight is the winding system of torii lined paths that snake through the woods and up the mountain behind the shrine, marking the way for a pilgrimage to the top. Torii are large stylized gates, famous markers of Shinto sacred space, that are often vermilion-lacquered, stone, or unfinished wood. They are meant to guide people to the path of the kami (a literal translation of Shinto is “way of the kami,” and that “way” can be literal and figurative). Meanwhile, kitsune (foxes) stand guard as Inari’s messengers. As Olivia notes in her reflection (following), the shrine complex at dusk, in the rain, was a charged environment inviting openness and contemplation.

Special thanks to Mr. Akihiro NOMURA for his time and energy in hosting our first full day in Japan!