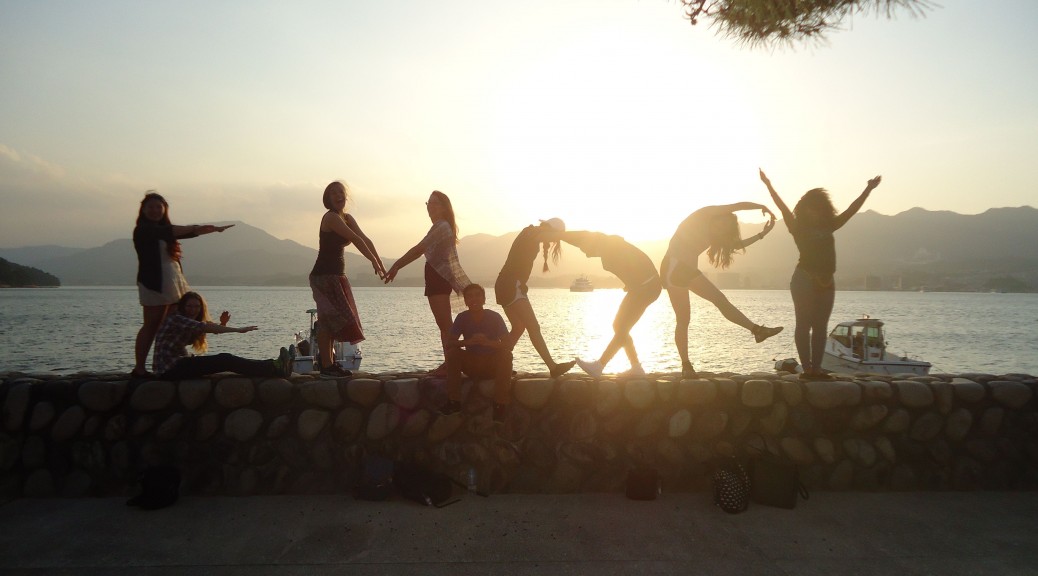 We got to ride our first shinkansen (bullet train)! Students loved the power of the super-high-speed train to shuttle them from Kyoto to Hiroshima. Then, after decisively concluding that 11 people with luggage have no place on crowded Hiroshima city buses, we got settled into our accommodations in Hiroshima and never used a Hiroshima bus again. The women students would share Japanese-style rooms, sleeping on futon mattresses laid on tatami mat floors. But first, we had other fish to fry. We headed for the ferry terminal.

Everyone loved the ferry across the Seto Inland Sea to the island known as Miyajima (Itsukushima)—a famous resort area that also happens to be a Shinto sacred island, enshrining a mountain and its environs as kami with a sprawling Shinto shrine complex. The entrance to the shrine is marked by a giant torii a short way offshore in the bay. When the tide is high, the torii (and the shrine itself, for that matter) “float.” We timed our journey using the tide tables so that we would arrive to a floating torii rather than a torii on a mud plain. It was magnificent in the late afternoon sun. Once we docked, we walked toward the shrine and were able to view the floating torii right at sunset.

Many of us later identified this time as the time the group took on a cohesiveness it hadn’t yet gained—maybe because of our awesome “Emory” promo shot spelled out by group members. The shrine closed, and we saw the shrine attendants sweeping up after a busy day. After we had taken in the shrine and the torii, we had time for omiyage (souvenir) shopping and found a charming little restaurant for dinner (perhaps the only one open on the entire island) before returning to Hiroshima on a late ferry. The peaceful vantage the ferry provides on Hiroshima always strikes me; from the sleepy ferry full of tourists, I simply cannot imagine that city in flames.