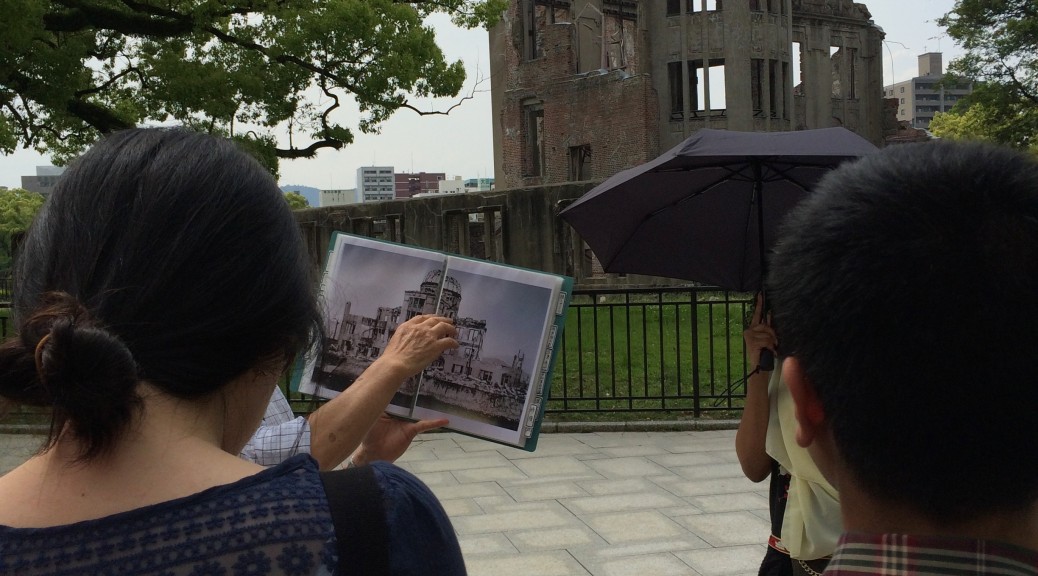 It was this day in Hiroshima that anchored our travel experience. We started the day hosted by the Hiroshima Peace Culture Foundation (HPCF) and the remarkable Ms. Yasuko OKANE for a recitation of bomb-related memoirs and poems at the Hall of Remembrance for Victims of the Atomic Bombing. Three volunteers and the students participated in the poetry recitation, and as poems were repeated multiple times by different voices, all of us were overwhelmed by the experience. The recitation—active, not passive—disrupted our expectations and required participation in a way the students hadn’t yet experienced, “resetting” everyone for the day and using the unsettling time to open them to the encounter.

Then the director took us on a guided tour of the Peace Memorial Hall and Hall of Remembrance itself– with its beautiful, intentional memorial space. We lingered in the main hall, surrounded by a panoramic mosaic view of the bombed-out city constructed out of 140,000 tiles—the number of dead in Hiroshima by the end of 1945. The plaster for the room was mixed with dirt from post-bomb Hiroshima. There was a fountain in the center of the room, its surface a clock face marking 8.15am, the time of the Hiroshima bombing, that continually offered water for the city’s victims. Emerging back upstairs, the students took time on their own to experience additional testimony in the library’s video and audio databases before we departed for lunch.

At Café Charli, we gathered around a long French rustic table for Japanese comfort food in the form of the ubiquitous “set lunches” that typically include a main dish, sides, drink, and sometimes small dessert for a very modest set price. We had learned that the café was popular among HPCF staff, and despite its location to the Peace Park, there were few tourists; the café allowed the students a glimpse of an archetypal Japanese café (complete with the French theme) while we discussed the impact of the morning.

We then returned to the park to visit the Peace Museum. After a brief introduction from the Deputy Director, we proceeded through the museum on our own. It was very crowded with schoolchildren on field trips, and the museum was undergoing renovation of some key exhibits, but the Global Connections students maintained focus and attentively engaged even the smallest of exhibits. Later, we also discussed the impact these exhibits might have had on all the schoolchildren, since we discussed with Dr. Zwigenberg the appropriate ages for children to encounter such images and information.

Next we joined Mr. BITO, a local volunteer, for a tour of the Peace Memorial Park. It is hard to capture the multitude of memorials and monuments attesting to so many lives lost from so many places—Korean forced laborers, conscripted schoolchildren, entire neighborhoods, aid workers and soldiers, companies and pillars of the Hiroshima community. The park sprawls across the area near the bomb’s hypocenter. It lies south of the Aioi bridge, the distinctive T-shaped structure of which was used for bombardiers to “sight” the bomb, and just west of the iconic Genbaku Dome (A-Bomb Dome), razed and preserved in its ruined state to stand as a testament to the destructive power of the bomb.

We finished the day rather as we began—with testimony (taikenki). Ms. Keiko OGURA generously offered her time to share directly with the students her thoughts and reflections from the time of the bombing. Ms. Ogura worked as a translator, so not only was she able to speak to the students directly in the language that was native for most of them, but she demonstrated many other facets of translation as an international act of communication, a transmission of something vitally important, across time and space. She was more than a storyteller, and she delivered her message with intention, aiming directly for the hearts and minds of the students—as described by Justin and Kim in their reflections.

The students were then free to wander through this city that literally was built on the remains of its dead, trying to see past the new and shiny buildings to what lay beneath.

We offer our deepest gratitude to Ms. Keiko Ogura for her care and concern in sharing her words with us today, the directors of the Peace Museum and the Hall of Remembrance, and the volunteers who generously gave of their time.