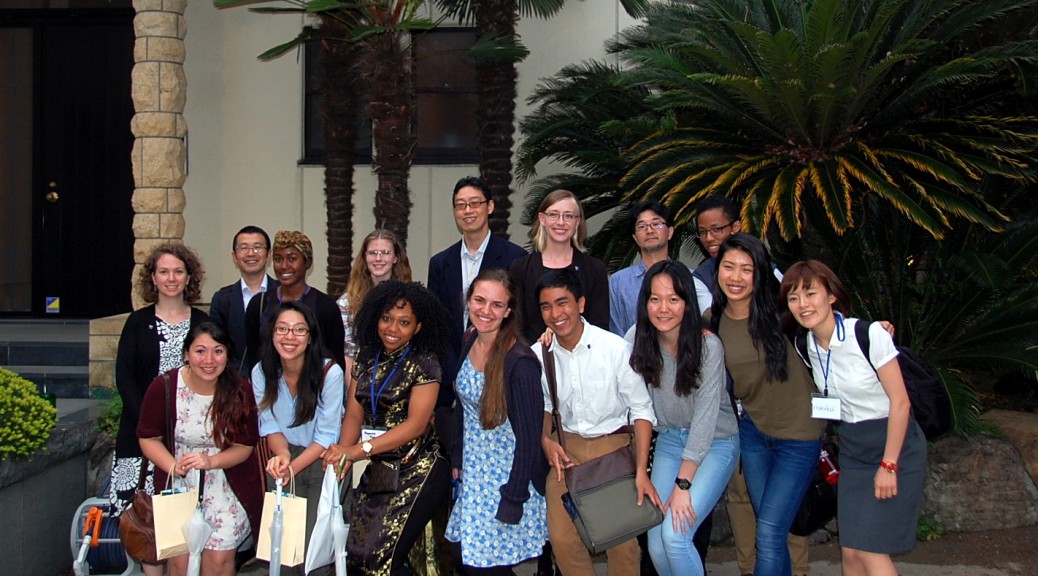 After a Monday on our own, we were back at it early in the morning. Our experienced travelers prepared for a long day away from the hotel with a variety of audiences. Somehow we managed to find the Shokeikan, an elusive museum dedicated to the hardships of veterans and their families. The museum bears the subtitle, in English, of “Historical Materials Hall for the Wounded and Sick Retired Soldiers,” but as the website notes, the “shokei” also “means to pass down, succeed or inherit,” clearly indicating the impetus behind the creation of the museum.

Until this point, students had learned more about civilian victims of the wartime military actions of both Allied and Japanese forces—as well as critiques of the actions of both of those militaries and their authorizing governments—than about military victims of the war, many of whom returned from traumatic battle fronts, sick and injured, to a country grappling with defeat, occupation, and economic devastation.

From this encounter with wounded veterans’ issues, we proceeded to Yasukuni Jinja, a sprawling, controversial state Shinto shrine complex dedicated to those who died while serving Japan and its emperors. We were bound for the Y­ûshûkan, the nationalist museum on the premises, to further probe the self-understanding and imperial history of the country. This was a very challenging morning, particularly for those in the group with Chinese, Korean, and Filipino heritage—a heritage connected to nations that suffered greatly at the hands of the Japanese military.

But to engage questions of “peace,” one has to engage complicated and overlapping histories, barriers and pathways to peace, competing discourses, the multiple sufferings wrought by human hands, and the attempts to find ways through seemingly irresolvable animosities, cares, and concerns. Returning to the issues of peace, memory, and justice with which Global Connections is concerned, students were left to draw their own conclusions about the ravages of war and the relations between human beings and the nation-states they inhabit. Hate and love, we see, are neither simple nor separate.

Our afternoon activity afforded time to reflect intentionally on these questions from various scholarly and religious perspectives. But first we had lunch at the restaurant Taimeiken, a landmark institution famous for its tampopo omurice, or dandelion omelet rice—so named for the way the egg omelet, once cut down the center, unfolds in a dandelion form over the mound of rice underneath, and also the inspiration for the omurice featured in the famous foodie movie Tampopo (see full explanation of the food and the restaurant here). We owe our thanks for the reservation to Kentaro-san, yet again.

To close our day and resume our reflections, we met with the Buddhist religious group Shinnyo-en for a temple tour—warmly welcomed and escorted from the train station in the Hiro-o area of Tokyo.

Then we joined these and other representatives from Shinnyo-en’s academic research unit, the Center for Information on Religion (CIR), for a lecture on peace and comparative commemoration by Tokyo University scholar of religion Dr. Akira NISHIMURA.

Our session concluded with a group discussion of Dr. Nishimura’s lecture and Shinnyo-en’s commemorative “lantern floating for peace” events as well as their many international and interfaith “paths to peace” initiatives—connecting local people in communities across the world, world leaders, religious leaders and practitioners, businesspeople, the academic community, and youth, across religious and secular spheres.

We then walked together to a nearby restaurant and continued our discussion at a group dinner generously hosted by the CIR.

We are grateful to the Shokeikan and Y­ûshûkan for their openness to outsiders; to all of Shinnyo-en; and to Dr. Akira Nishimura for his enlightening and accessible presentation. We would like to recognize the generosity of Shinnyo-en’s Center for Information on Religion in particular, including Dr. Kenta Kasai, Mr. Daisuke Shirane, Prof. Takehiro Sato, and Mr. Paul Yarabe. Global Connections 2015 is also supported by a generous grant from the Shinnyo-en Foundation (SEF), a secular philanthropic organization affiliated with Shinnyo-en: thank you to all the SEF staff but to Dr. Ineko Tsuchida and to Ms. Katie Miura in particular for the facilitation of this grant.