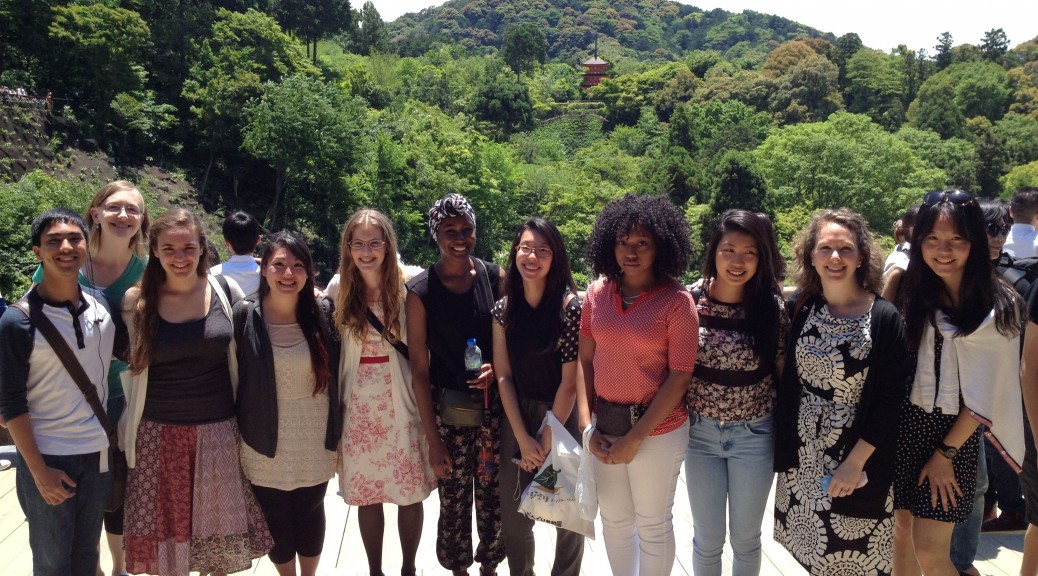 After taking care of some housekeeping in Tokyo in the morning, our shinkansen spirited us away to Kyoto. We settled into our hostel, and the students felt like they were returning to dorm life. We didn’t have much time before dinner, and we got as far as the Kamogawa River before deciding that it might be better simply to divert toward dinner. We split up for dinner and returned for a seminar.

After breakfast at the hostel the next day, we wanted to get to the busy area around the famous Kiyomizudera early. As bus after bus stopped already so crowded with students and tourists that we couldn’t board, we decided to simply walk to the area. Kiyomizudera is a Buddhist temple, situated high on a hill, overlooking Eastern Kyoto and a very traditional labyrinth of temples, shrines, and shops.  The shops feature not only the ubiquitous tourist kitsch aimed at the relentless student field trip groups but also many quiet, traditional craft shops and shops showcasing delicate, umami-rich Kyoto food and drink. People come to the area for maiko (apprentice geisha) sightings, but many young women also pay to dress in summer-weight or full kimono themselves.

Before striking off for the temple, we had a small piece of business in this area. The students were still deeply disappointed from not being able to visit the Studio Ghibli museum (showcasing the animated films of Hayao Miyazaki as well as his creative process, a general sense of wonder, and specific messages about valuing childhood and the environment—important messages for peacemaking work!) before it went on summer hiatus. Thus Prof. A wound the increasingly skeptical students through the back streets of Eastern Kyoto to emerge at the next best thing—the magical Studio Ghibli store. Their thirst for whimsy sated (at least until their free time later in the day), the students took the equally circuitous route back toward the temple, climbing higher and higher above the city, becoming more and more surrounded by the throngs of field trip students. We knew we were headed in the right direction.

Temples situated on high hills allow for pilgrimage among the religious and righteous exercise for the remainder. We passed the outer gates, pagoda, shrines, and smaller temple halls before reaching the main complex. We paid our admission and entered the hondo area, which features the main temple structure and its majestic veranda or “stage” overlooking all of Kyoto. Nearby is the Otowa waterfall for which the temple was named (“kiyomizu” meaning “clear water”—the “dera” marks it as a temple). The temple was established in the 700s, before Kyoto became the capital of Japan, and most of the current buildings date from the 1600s. The temple houses a potent statue of Kannon bodhisattva. Kannon is the bodhisattva of compassion; it often figured as a female figure particularly attentive to children. Combining worldly and otherworldly power in this way, Kiyomizudera anchors Eastern Kyoto in a heady mix of historical, cultural, and spiritual weight.