Dr. Jill Petersen Adams (resident blogger) is Assistant Director of the Center for Academic Excellence at Oxford College of Emory University, and she has taught courses there in Religion and the Honors Program.  Dr. Adams earned her Ph.D. and M.A. from the Department of Religion at Syracuse University over many dark winters. She also holds a B.A. summa cum laude in philosophy and religion from Emory University. She is an Oxford College alumna, so she is happy to have returned “home.” She specializes in Asian and Continental philosophy of religion with emphases on Japan and Germany. Her current work explores alternative conceptions of mourning and memory, focusing on postwar issues in Hiroshima and Berlin specifically, and she also works with a Japanese Buddhist group that pursues socially engaged religious practice with a view toward cultivating global peace and compassion.

Dr. Adams’ research brought her to Hiroshima, Nagasaki, and Kyoto in 2012 following more extensive travel around Japan in 2010—including four days hiking the remote Nakasendō, the rustic Edo-period central mountain foot trade route between Tokyo and Kyoto.   She is excited and honored to return to Japan in May 2015 with students participating in the Global Connections program, focusing on peace and social justice issues worldwide. Dr. Adams also brings to the program her loves of Japanese food, tea culture, literature, and the martial arts of Okinawan Gōjū-ryū karate and Japanese kendō. She lives in Atlanta with her husband and young daughter.

Dr. Margaret T. McGehee is Associate Professor of American Studies at Oxford College of Emory University. Her research and teaching focus on twentieth- and twenty-first-century Southern women writers, the Atlanta imaginary in fiction, and multiethnic U.S. literature, with a focus on immigration experiences. She was particularly excited about co-leading the Global Connections trip to Japan because of her love of international travel and her interest in how collective memory functions within a society traumatized by war, particularly the narratives and memorials that members of that society construct to remember the past–a topic that she will continue to explore when she and Dr. Susan Ashmore take students on a Global Connections Civil Rights-focused trip throughout the U.S. South next May.

Dr. McGehee’s work has appeared in Cinema Journal, North Carolina Literary Review, Studies in American Culture, Southern Spaces, and Gale’s American Writers series. She received her Ph.D. in American Studies from Emory University and M.A. in Southern Studies from the University of Mississippi. When she is not teaching, grading essays, or traveling, Dr. McGehee enjoys going on adventures with her organic farming husband, Daniel, and their entertaining five-year-old son, Benjamin. 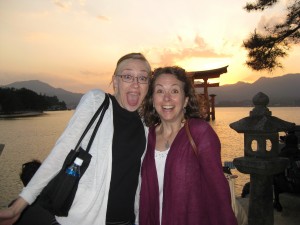