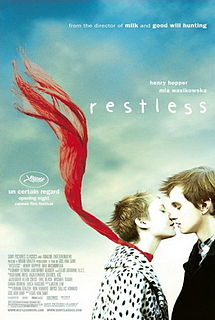 Several months ago I saw Gus Van Sant’s 2011 movie Restless for the first time. I admit I was originally drawn to it because Henry Hopper, Dennis Hopper’s son, was playing one of the leads and I was curious as to what the son of director and costar of Easy Rider fame would bring to the big screen. As I watched, however, my attention was drawn to the presence of death in the film and the differences in the way those who have to face their own passing and those who have to face the death of a loved one deal with it.
Restless follows the story of two young adults, Enoch and Annabel, who both have had more than their faire share of experience with death. After meeting at a funeral Annabel was attending and Enoch crashing, the two develop a relationship. However, because Annabel is suffering from a brain tumor the two are only projected to have three months together, during which time they are forced to come to terms with Annabel’s imminent death.
Annabel has a calm understanding of her situation right from the beginning, while those around her are much less accepting and are sometimes even frustrated by her seemingly blasé way of talking about her own death. Throughout the film it’s clear that living with the constant presence of death, whether in the form of another patient’s funeral or her own prognosis, has drastically changed her view on life. At one point while talking with her sister, Annabel says that only having three more months doesn’t really both her since in the large scheme of things the existence of humanity itself is just a small speck on the universe’s timeline. Many times she also mentions that there’s a type of songbird that thinks it dies every time the sun goes down and sings in happiness every morning when the sun rises because it realizes it’s still alive.
Enoch on the other hand was never able to properly grieve the death of his parents, resulting in unresolved anger and an inability on some levels to deal with death. Though at first it seems he’s accepted that his girlfriend only has 3 months to live, it becomes clear later on that what seemed to be acceptance was really denial. The final half hour of the film focuses on his coming to terms with Annabel’s approaching death, partially facilitated by his interactions with his “ghost friend,” a kamikaze pilot called Hiroshi with whom he talks and plays battleship.
While rewatching the film this week there were two points in the film that especially made me think of discussions we’ve had in Death and Burial this semester. About halfway through the film Annabel mentions that she’d like to donate her body to science. Enoch is very unhappy with her decision and states that he doesn’t like the idea of people cutting her into pieces and “putting her eyes in jars.” This made me think about the potential effect on family members when someone decides to donate their body to science or for organ donation. Do most people consult their loved ones before making that decision? Should loved ones have a significant say, since in the end they’re the ones who are really affected by what happens after death? Later on in the film Enoch and Annabel rehearse a “death scene” they’d prepared for Annabel. She’d planned out precisely how she wanted to die. This reminded me of the way medieval good deaths were organized and also how some people plan out their funerals ahead of time to the last detail. I did find it somewhat odd that she was planning out her death scene, not her funeral, though this does go back to the importance, even today, of the moment of death in how an individual’s death is viewed. Many films contain death-related material, but not many flat out address it as Restless does. Often when a film’s focus is death the film is somewhat confrontational, while Restless managed to introduce and discuss the concept in a surprisingly open and comforting way.

This entry was posted in Uncategorized and tagged Good Death, grief and mourning, Jana Muschinski, Restless. Bookmark the permalink.

One response to “Restless”