For centuries, cats have been associated with death, and how they are perceived varies between cultures. In Western cultures, black cats are associated with bad luck, disease, and witches. This not only led to the mass killing of black cats, but also the “witches” who care for them. But in Ancient Egypt, cats are deified and mummified. (Here is a short list of how cats are linked to the dead, dying, and the ill, and another short summary of black cat myths.) Throughout history people linked cats with death or bad luck, and some of these beliefs still hold true today. But what is it about our beloved cats that makes them so notorious through history? Is it their powerful, stealthy ways that makes them so mysterious? Cats can also be creepy, but creepiness isn’t enough to feed the strong connection people feel between cats and death. Cats may have characteristics that link them to death, but perhaps our perception of these strange creatures derive from our experiences with them rather than their traits alone. 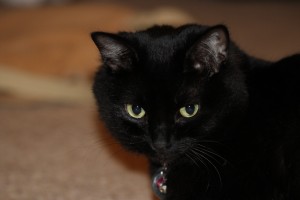 Cats, like other animals, are very intuitive and can sense things that humans cannot. For example, their eyesight and sense of smell are more acute than ours. Because cats rely primarily on body language to communicate to one another, they must be attuned to biological and behavioral changes in the other animals around them. This includes detecting weakness or changes in body temperature and odor. They are also intuitive in that they often know when they are about to die. I have heard stories where cats hide or “run away” from home to find a place to pass away peacefully. Therefore, cats are attuned to their bodies and their environment to the point where they can detect signs associated with death. 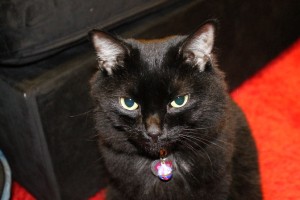 One extreme example is a cat in Rhode Island named Oscar, who lives in a nursing home. Oscar is known for predicting a patient’s death, and will climb onto the dying patient’s bed and stay with them until they die. Sometimes, Oscar will stay with the patient the day before death, or even a few hours beforehand. Oscar’s behavior sometimes helped notify the staff of a dying patient, and even proved the staff’s predictions to be wrong at times.

How Oscar “knows” when a patient is dying is still a mystery, but experts have their theories. First, Oscar may be smelling chemicals expelled by the dying body that we are not able to detect. The second theory is that Oscar has been imitating the behavior of hospital staff. When the staff predict that someone is dying, their behaviors change and Oscar learned to copy their behavior when a person is dying. Rather than finding this occurrence creepy, family members of the dying find Oscar’s presence comforting and the staff find Oscar’s ability helpful.

Have cats earned their reputation partially due to their uncanny ability to detect illness and imminent death? Or is it still because of their characteristics? Is it still mainly due to the eccentric cat ladies of the Salem Witch Trials? Much of Western culture today associate cats with the comfort of home and the warmth of company, but some of these old beliefs still exist. Like death, cats have a certain mystique that we find intriguing, powerful, and sometimes threatening. 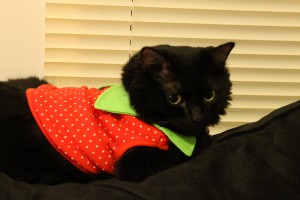 4 responses to “Cats and Death”