Two Massacres and No Funeral

We’ve been talking about in class how central the funeral is to the mourning process.  The funeral takes care of the body and gives mourners closure.  So what happens when there is no funeral?

This is unfortunately usually the case in war or genocide.  The dead are piled into mass graves or sometimes just left where they were killed.  Throughout history, the innocent have been massacred and their bodies unceremoniously abandoned.  One example is the recent archaeological discovery of a 5th century massacre in Sweden.  The remains show that the individuals experienced violent deaths and were left where they fell, since the dead were usually cremated during this time period.  Read more here: 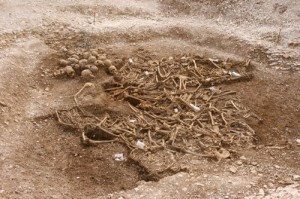 This regrettably still happens all over the world.  It happened during the Holocaust, the genocide in Bosnia and Serbia, and in Liberia.  The massacre in Liberia took place at a refugee camp twenty years ago, with the victims dumped into an unmarked mass grave.  Action is only being taken now to bring the perpetrators to justice.

The victims of these massacres are not cared for after death by their loved ones.  They did not get the ceremony they wanted or that their beliefs mandated.  Their loved ones did not get to say good-bye to their deceased.  What happened in these communities? How did they deal with their loss?  How did their community not break down in the absence of this most important rite of passage?

I think that when something this terrible happens, the community just has to reset and move on.  Since the violent situation often makes it impossible to loved ones to go back and claim the bodies of their deceased, people just have to accept it and move on.  This sounds rather harsh but I think that this is the community’s survival mechanism.  If they tried to go back and claim the bodies for a funeral, it would take a very long time or they could be killed themselves.  They have to come to terms with the fact that they won’t be able to care for the body as they wish and they must honor them in some other way.

The lack of a funeral tends to lend itself to the building of a memorial monument, such as the Tomb of the Unknowns in Arlington National Cemetery in Virginia.  When individuals of a community can’t honor their own dead, the community honors them collectively, thus giving the mourners closure and the dead their respect.

2 responses to “Two Massacres and No Funeral”