The Ways We Grieve

My research topic for our final paper is how people express grief and undergo the mourning process on Facebook. While I have been thinking about this subject it has heightened my awareness to how humans in general cope with grief and the idea of dying. We have cultural, social, political, and emotional (and many other) ways of approaching death. There are different ways we talk about death before it happens and different ways we talk about death after it happens. We plan and prepare then we grieve and memorialize. One incident has come on my radar recently that I would like to discuss in the context of the flexibility of ritualization.

Messages in a Bottle 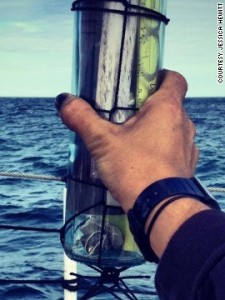 On the anniversary of the sinking of the HMS Bounty, the survivors gathered to memorialize two friends who passed away. A year earlier, the HMS Bounty sailed into Hurricane Sandy. The old boat didn’t stand a chance. It was tossed and turned until it eventually sunk. The Captain and a rookie sailor passed away. Friends gathered to send messages to those they had lost. The rookie sailor, Claudene Christian, had promised Jessica Hewitt that they would send messages in a bottle during the passage. It seemed appropriate to all to send their love by a message in a bottle. They wrote apologies and missives and send their messages out to sea. They even weighted the bottles down with iron shackles because “it is the only way the message would get to them”.

We attach our grief to things to give it more meaning. The plain idea of writing a message to someone who has passed away and then making sure it sinks so it can reach them is utterly absurd, but put in a cultural and emotional context it provides a necessary level of closure for the survivors. The idea of a message in a bottle is fitting not only for how death entered their lives but also it had been established as a personal connection. The Captain’s body was never found so it is a comforting idea for the crew to send a message to their Captain’s final resting place.

While others would get together at a loved one’s favorite place or gather around a gravestone, these friends and family came to the ocean to pay their respects. In the context of these particular deaths the flexibility of ritual allows for mourners to experience grief in such an individualized way. The ocean provides a physical space for the mourners to express their grief in a way that feels tangible. This instance reveals the flexibility in the structure of grieving in America.

One response to “The Ways We Grieve”