The City Museum of St. Louis: Perpetuating Life After Death

Posted on October 3, 2015 by Brianna Murphy | Leave a comment

“Do not be too timid and squeamish about your actions. All life is an experiment. The more experiments you make the better. What if they are a little coarse and you may get your coat soiled or torn? What if you do fail, and get fairly rolled in the dirt once or twice? Up again, you shall never be so afraid of a tumble.” –Ralph Waldo Emerson

September 26, 2015 marked the four-year anniversary of the death of Bob Cassilly, a renowned sculptor, creative director, and entrepreneur-extraordinaire. His accidental death, at the age of 61, occurred while building his project Cementland. Cassilly was born and raised in St. Louis, Missouri—where he applied his active imagination and passion towards creating places in which joy can be shared and realized by the collective-individual.

Perhaps the crowning jewel of his legacy is The City Museum. Founded in 1997, this unique place serves all-ages as an urban playground dedicated to co-explorative, co-creational learning. The City Museum encompasses many pedagogical aspects—architecture, history, science, religion, culture, art, and various artisan crafts intermix for the sake of experimentation and fun. 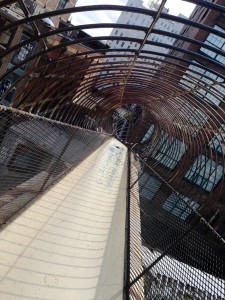 Bob Cassilly’s death inspired his work companions, devotedly dubbed the Cassilly Crew, to maintain his legacy and just keep building. Bob Cassilly left a mark on the community of St. Louis—a mark that is a gift of perpetual opportunity to engage growth, learning, and understanding in a manner that provokes the imagination in the most remarkable of ways.

I first visited The City Museum in November of 2007, during an era of Bob Cassilly’s vitalized creation. Upon my recent re-visit in August of 2015, I felt shock and awe for the sheer amount of change that had taken place during the time in-between. The staff’s reaction is a story in and of itself. They took great reverence and pride in how their actions reflected the legacy of Bob Cassilly. Rather than swallowing the negative emotions whole, his death ignited a zest for carrying on with his dream and best intentions. The evidence: the perpetual construction, commitment, prosperity, and devotion of the community towards benevolent engagement represented by The City Museum.

Death is a complex process constructed through biological and socio-cultural definitions. The lines that connect these processes of meaning-making become arbitrary as we delve further into the processes of death itself. Ultimately, the way in which we die is intimately linked to how we live. When we ask what constitutes a good or bad death, we expose how the concept of death is known and shaped by predispositions and expectations. Bob Cassilly’s sudden and unexpected death was bad, but the good of his life is exhibited through all that it inspires. His death prevails through what he chose to make with his life.

This entry was posted in grief and mourning, the process of death and tagged Bob Cassilly, Living Memorial, Pedagogy, The City Museum. Bookmark the permalink.