Save the Planet, Kill Yourself

Over the past few weeks I’ve been really into researching religious zealots and cults (brought on by this Netflix documentary called Jesus Camp –10/10 would recommend) and I just read an article about one group in particular that shocked me a little more than all the rest. The Church of Euthanasia was founded in the mid-1990s by an ex-DJ named Chris Korda, who says the church’s guiding principle is “Thou shalt not procreate.” Apparently, Korda and her followers (of which there were more than I had hoped) were so worried about climate change and overpopulation that they decided to start a movement based solely on encouraging people to die. 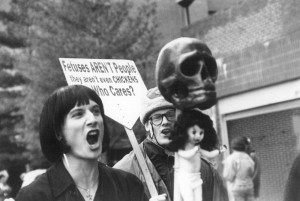 “Fetuses AREN’T People. They aren’t even CHICKENS. Who Cares?”

The Church of Euthanasia gained traction by protesting at major political events, including the 1992 Democratic National Convention, where they popularized their slogan, “Save the Planet, Kill Yourself.” This fits in nicely with the four pillars of their religion, which are as follows: “Suicide (optional but encouraged), abortion (may be required to avoid procreation), cannibalism (mandatory if you insist on eating flesh, but only if someone is already dead), and sodomy (optional, but strongly encouraged).” It seems as though the CoE was trying to get rid of the Earth’s population through every way possible, except outright homicide. Side note: I’m a little unsure of where cannibalism fits into the whole philosophy, but I guess that by consuming dead bodies you’re freeing up space for other activities???

The part that really shocked me was the hotline the Church attempted to set up, which would have provided round the clock instructions for people looking to commit suicide. It’s kind of a cruel twist of fate, because suicide hotlines are normally resources used to prevent suicide, not to encourage it. I really couldn’t believe that people’s lives meant so little to the members of this group that they were willing to encourage this sort of behavior for the sake of an imperceptible amount of extra breathing room on the planet.

I was expecting a disclaimer at the end of the article, something along the lines of, “Korda, along with her most loyal followers, committed suicide in 1995..,” but there was none. The founder of the Church of Euthanasia, who had no problem telling everyone else it was their duty to die, is still living today. Whether that means she felt she needed to be here to keep up the mission, or if the whole thing was just some elaborate hoax, I don’t know.

This article is part of a Vice News column called “Post Mortem” and there are some really great pieces on there as well!

This entry was posted in mass death, ritual, suicide. Bookmark the permalink.

One response to “Save the Planet, Kill Yourself”