One of my favorite aspects of my study abroad experience in Spain last spring was learning about the recent history of the country, mostly pertaining to Franco’s rule. Many Americans are not taught this history in school and I had little to no knowledge of Franco before I arrived in Spain. Francisco Franco or “el Generalissimo”  was head of state for Spain from the late 1930s until he died in 1975. He assumed power after the civil war in the 1930s between the Republicans and the Nationalists (a sect of fascism). Being a military man that fought for Spain in North Africa, he ruled the country with strict rules and regulations. Soon, his rule turned into a dictatorship. Franco’s nationalists were supported by Hitler and Mussolini, which demonstrates the oppression found in the country at the time of the civil war and at the early points of Franco’s reign. The country was closed off to the rest of the world for many years until a tourism boom in the 1950s exposed the country to the other European countries and even the U.S. The oppression and violence Franco used during his rule has had everlasting effects on the Spanish population, which is why his burial and gravesite continue to be so controversial. 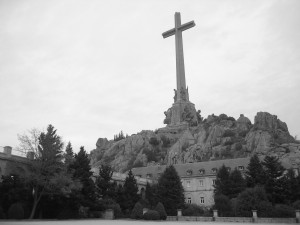 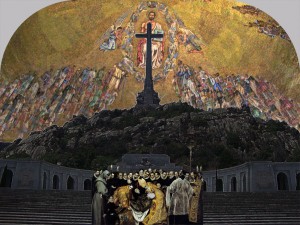 With this quick background knowledge, I imagine you can believe that Franco is a sore spot in history for many of the Spanish. It seems unlikely that his grave would turn into a tourist site right? Well that is the opposite of the case. His funeral and open casket drew huge numbers of people to the cathedral in Madrid. Many people can be seen crying in the news coverage. Another large part of the population that attended his funeral were there to show their hatred and disdain for the dictator. While Franco was still alive, he had Republican prisoners start building his memorial site right outside of Madrid. He purposely chose the spot he did because it is close to the resting places of the Spanish kings at El Escorial. The building is massive. When driving between Madrid and Northwest Spain, you can easily see the Valley of the Fallen from the highway. It has a towering cross and a huge mausoleum complex buried in the hill. As I have heard, after Franco’s death and burial the monument was spun to represent the fallen during the Spanish Civil War. The building is extremely controversial and the Spanish are not sure what to do with the monument. 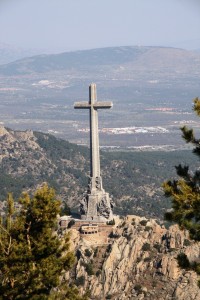 Do you allow a building to continue to stand that symbolizes so much oppression? Is it possible to repurpose this gravesite to mean something else? Spain has an intriguing law, la ley de la memoria, that has condemned Franco’s rule and has mandated that all street names and other references to Franco be changed. I believe it is difficult to change this monument because it pertains to death and may disrespect the dead if there are any changes to the monument. The law also prohibits political events to take place at the site of Franco’s grave. This demonstrates that there still are tensions in the community due to the dictatorship and the sight of the grave of a controversial leader can reignite these fractures in society. Because the Valley of the Fallen houses many other victims of the Civil War, it is almost impossible to know how to approach this issue without hurting the individuals involved.  Franco’s grave presents an example of how even after someone dies, their influence can continue and can be perpetuated by how they were buried.

This entry was posted in cadaver, grief and mourning. Bookmark the permalink.