The Attack on Paris

By now most people have seen the news that Friday night there was a terror attack in Paris. I can only imagine what the people of France and specifically are feeling this morning. This morning when I signed onto my social media accounts I notices a few things that people were posting about the attacks, “stand with paris,” “Paris is in our prays”,  and interestingly enough I saw post that related to how Paris, France reacted to 9/11 and how we should show the same support they showed us. I then when onto the New York Time website and in enlarged letters stays, “Hollande-Blames ISIS for ‘Act of War’ on Paris”.

The article talks about how the president of France is taking on the situation. France has gone into a three day grieving period. According to the New York Times article, they are almost certain that ISIS an Islamic extremist group is behind the attacks. Hollande states that they are prepared to begin fighting if necessary within the guidelines of the law. I am sure as the next few days pass there will be more evidence and information revealed about the attacks but for now it is a time of reflection and mourning for the people involved.

Currently it is believed that 127 people are dead and more than 200 people have been hospitalized. In class we have discussed the idea that we have ritualized death as a way of grieving and it allows us to find a way to move on. Do we have a ritual for death when it comes to terror attacks. In the post 9/11 world the term terror attacks has been used mainly to describe an attack made by extremist groups on certain countries. The United States especially New Yorkers, I being one of them remember quiet well that day when all things changed in New York. How do people grieve the deaths of innocent individuals killed in such attacks? Does the pain ever go away?

I personally have never first hand experience a death due to a terror attack or suspected terror attack so I couldn’t answer those questions. But as the world becomes a more dangerous place I think it is important for ritual to be implemented to allow family and friends to grieve these losses in a way that is health and respectful. I could only imagine how difficult it may be to grieve a person whose body may not even be recoverable. Similar to that of a solider who dies in combat and the only thing that can be found of theirs is the dog tags.

Paris is in our hearts and prayers during their time of need. This is just one example of what people have been posting throughout social media since the attack occurred. 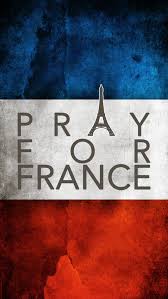 This entry was posted in mass death. Bookmark the permalink.

One response to “The Attack on Paris”