In New York City, a photographer named Brandon has made a career of photographing people in the streets, recording their story, and posting them together on Facebook. Started in 2010, his Humans of New York Facebook page has since accumulated over 15 million followers and garnered international fame. His candid photographs and either concise or multi-part stories reveal intimate stories to the public, connect individuals all over the world, and create a beautiful network of strangers related only by a common humanity.

Stories portray a range of human experiences- the joys of falling in love, the losses of family members during wars and genocides, the violence in poor neighborhoods, and moments of personal struggle, defeat and successes that will trigger tears in crowded coffeeshops, laughter in silent libraries, and long reflection during the busiest of days. Among the most poignant of stories are the ones revolving around death and dying. One recent post depicts a woman whose spirited smile defies her 86 years of age. 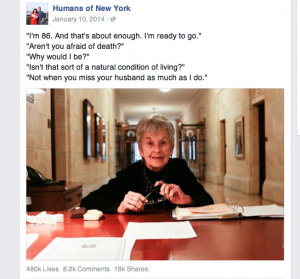 Although the photographer emphasizes that the fear of death seems to be a human universal, she denies sharing this feeling. Her matter of fact assertion that she does not fear death is attributed to her longing for her husband. Does this woman believe death will reconnect them in the afterlife? Or does the sheer pain of life without him cause her to forsake life itself? Regardless of her reasoning, the yearning for her husband is powerful enough to neutralize a fear so intense it is referred to as “a natural condition of living”,  and readers are left with heart wrenching empathy for this woman’s literally undying love and loss of her husband.

Other stories touch on the spiritual. 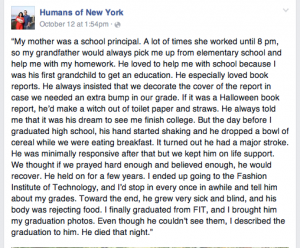 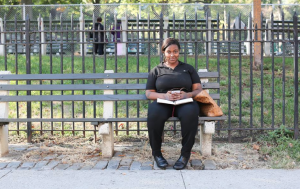 A young woman describes the close relationship she had with her grandfather- a man who deeply valued education. He suffered a major stroke and remained on life support, while his granddaughter went on to college. Her descriptions of the college graduation at his bedside preceeded his death later that night. Whether an eerie coincidence or a divine sign, the news of his granddaughter’s academic successes seemed to provide him with a sense of completion and finality- allowing him to pass from this life to whatever lay ahead.

Stories like these go on for pages. While their faces represent the full range of physical diversity, their words are identical in candor and intimacy. Why are these people so willing to share such tragic, uplifting, and intensely personal moments of their lives with millions of strangers? Is there something inherently palliative about confiding in others? Perhaps the social dialogue revolving around death is a way for us to cope with the dread it invokes. By addressing death, we lessen its power. The thoughts and narratives on platforms like Humans of New York provide vital outlets for survivors to share the burdens of tragedy. By sharing their stories and forming connections, people around the globe are healing from the wounds of mortality.

There is a group of rock starts whom all died at the age of 27 that perfectly exemplify the idea of a good death or a bad death. Currently, there are 49 members on this list, most famously including Kurt Cobain, Janis Joplin, Jim Morrison, Jimi Hendrix, and Amy Winehouse.  In a famous quote by Neil Young he stated “it’s better to burn out than to fade away”. This was later cited in the suicide note of Kurt Cobain. The idea behind this quote- and what is thought many of these young rock stars’ deaths is defining the difference between a good death and a bad death.

Here, a good death is one where you die famous, still in the spotlight and doing amazing things, never becoming old and fading away. A bad death is one where you slowly lose your sparkle and your death will no longer greatly influence your fans. When Kurt Cobain killed himself, people went in to mourning. Everyone remembers when they heard Kurt Cobain died, everyone cared when Amy Winehouse overdosed. I remember working at a summer camp for children and everyone screaming about how awful Winehouse’s death was. It is hypothesized that all of these members of the 27 club took their lives so that they could remain their young, beautiful, rock star selves in the minds of their fans forever- leaving a legacy. While there is proof that many of the members committed suicide, there is also thought that many of those that overdosed, did it purposefully. This would support the idea of their strategic deaths.

This reminds me of royal suicide. In some communities, when a king feels he is becoming weak, he will kill himself so that his people will not ever have to see him weak and the royal system can continue on- always having a powerful, strong body in power. While obviously the rock stars of this club don’t have as great of an impact as an actual king- they did call Elvis the “king of rock” and we all know what  the public’s response when he died!

Can the Intensity of Grief Vary Depending on the Type of Death?

I recently came across a news article about a 9 year old boy who passed away suddenly after collapsing while walking to his neighbor’s home to deliver cookies. The statement released by the boy’s father was heartbreaking. The news report has been shared all over social media, accompanied by heartfelt condolences from strangers across the country. The death of this boy and the response it created in the community made me wonder how the intensity of grief can vary depending on how the death occurred. We discussed in class how the death of a young child results in a different type of grief from both the parents and the community because a child was not given a fair chance at life. This aspect is obvious in the case of this young boy because he had his whole life ahead of him. However, I think the aspect of a sudden death increases the intensity of grief because there are no warning signs. The unknown is many people’s greatest fear and if a death is very unexpected it could create a more intense grief. Thus, the death of a loved one may be even more difficult to accept and move on from. The loss of a child is hard enough and the addition of not being able to prepare for a loss, especially something biological that is out of the child and parent’s control, creates an even worse situation. I think it is easier for us to accept death if there is a concrete reason for the passing of a loved one. A sudden death could result in a parent or loved one blaming themselves, even if there is nothing they could have done to save the deceased.