If You Can’t Cheat Death, Why Fake It 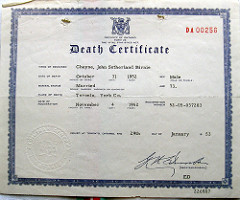 Recently, I feel as if I have been paying special attention to death much more than usual. What I have noticed is that death itself is constructed and created. Currently, I am reading an biographical novel about a prominent Viennese family, the Wittgensteins. Three of the Wittgenstein children are believed to have committed suicide, two of which, it is certain.  One of the sons, Hans Wittgenstein simply vanished; evidence points to him having committed suicide. Neither his body or Hans himself ever resurfaced. The family chose to withhold the news of his “suicide” for months until they thought the time to announce his death was most opportune.

For some reason the story of Hans Wittgenstein and his family made me think about pseudocide. Pseudocide, otherwise known as the act of faking one’s death, is a drastic measure taken by many who choose to avoid capture by law enforcement or engage in fraudulent activities such as insurance fraud. It can also be used to run away from massive debts. In today’s hypervigilant world, it has become extremely arduous for one to fake his or her own death. One must find a way to come up with way to make it seem as if he or she has actually died. The most popular ways to do so are pretend drowning or suicide. Even after the death, an individual must stay off the grid and assume a new identity.

With a quick Google search, one can find a WikiHow article called “How to Fake Your Own Death“. Additionally, a number of books exist on the matter, including a book by Elizabeth Greenwood in which she researched how to successfully make the world believe she had died. What I find to be most interesting is that, in faking one’s death, one must cut all ties from persons from one’s past life. In order to successfully fake your death, you must let go of your past life, the bad as well as the good. This I think, is both incredibly difficult and terrifying.

The circumstances under which individuals choose to fake their deaths must be especially dire enough for one to have enough desperation to run away from one life into another. Committing pseudocide is not without consequences for the friends and family left behind; if a body is not recovered, they may never experience closure. If they find out the truth behind their loved one’s death, the results of the deceit could be disastrous.

Ultimately, no matter what you are running from, is it worth it to fake your own death?

Posted on February 5, 2017 by Sarah D. Hesse Leave a comment

This entry was posted in Uncategorized and tagged fake death, pseudocide. Bookmark the permalink.