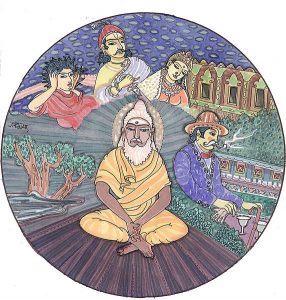 The Western definition of death is known as “the irreversible cessation of all vital functions especially as indicated by permanent stoppage of the heart, respiration, and brain activity”. Although this is true to define the end of someone’s life, there are many who believe that there is more to life even after death. Those who worship Hinduism believe that death does not necessarily mean the end. They follow the idea of reincarnation which means that the soul is indestructible and repeatedly takes on a physical body until moksha. Moksha is a term in Hinduism which refers to the various forms of liberation or release which occurs when the cycle of dying and rebirth ends. It is the central concept in Hindu tradition and included as one of the four main goals in human life. These goals include dharma (virtuous, proper, moral life), artha (material prosperity, income security, and means of life), and kama (pleasure, emotional fulfillment). The four together are called Purusartha.

Since reincarnation is essentially another chance of life, there are some important things to keep in mind. Good intentions and actions lead to a good future while bad intentions and actions create the opposite outcome. This plays an important role in how one is reincarnated. There is no heaven or hell in Hinduism but more of a release from the cycles which brings freedom to the individual.  The death of a family member is seen more as a celebration rather than a time of mourning. Hindus are cremated due to the fact that burning the body releases the spirit from the person.

This entry was posted in ritual, the process of death. Bookmark the permalink.

2 responses to “Reincarnation in Hinduism”