During class on Tuesday, we watched a short film called The Undertaking. The movie investigates the life and work of Thomas Lynch, the director of a funeral home. The film follows three independent stories of death ranging in age and type and in doing so, comments on the way that Americans perceive death and dying. One aspect of the film that stood out to me was my immediate aversion to the idea of dressing and embalming a corpse. As I watched the funeral home worker paint the face of a deceased elderly woman in preparation for her funeral service, I thought about if I could ever carry out the same task. Each time I thought about placing myself in his shoes, I felt an innate sense of discomfort. I began to think about why I might react so strongly and negatively to the idea of dressing a body for a funeral service. This made me begin to think about the aspects of death that make me most uncomfortable and why that might be. After some reflection, I realized that the dead body itself, in its absolute stillness, is quite unnerving to think about. Maybe this is because, as a society, we are constantly shielded from ever viewing death in its physical state. We rarely ever see dead bodies outside of certain contexts including hospitals and funeral services. Perhaps if we were exposed to death and dead bodies more often, I would not have felt so uneasy watching a man prepare a dead body for a service. I began to wonder how people who work in the funeral service industry become adjusted to constantly seeing dead bodies and discussing death. Do they also have the same immediate negative reaction that most of us do towards seeing a dead body? 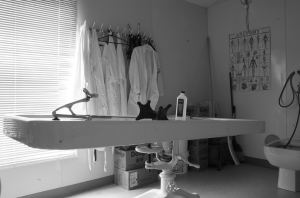 This entry was posted in the process of death. Bookmark the permalink.