Hindu Perspectives on Death: Karma and Its Implications

Posted on March 5, 2017 by Namrata Susan Verghese | Leave a comment 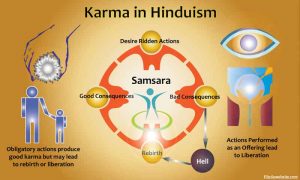 Hindu beliefs about death, specifically about karma, have always intrigued me. While I’m not religious, I’ve been exposed to Hindu beliefs my entire life, and examining them through a more scholarly lens for this post has proved fascinating. Hindu perspectives on death center on the idea that a person’s spirit (atman) is permanent; it lives beyond a biological death. In stark contrast, the physical body is almost like a temporary inhabitation, something disposable that you leave behind with the rest of your material belongings when you die. One of the Hindu holy books, the Bhagavad Gita, describes it this way: “As a man casts off his worn-out clothes and takes on new ones, so does the embodied soul cast off his worn-out bodies” (Bhagavad Gita 2:22). Notably, however, reincarnation (or samsara) has the end goal of moksha: the final release from rebirth. Your atman is reborn many times, when the soul returns to the physical realm in a new body, but ultimately the cycle will end and you will attain moksha.

One of the most interesting points I came across was the idea of karma, the “law of cause and effect which teaches that all actions have corresponding results.” Essentially, Hinduism dictates that your status in this life hinges on the merit of your previous life (samchita karma), and your actions in this life determine your position in the next life (agami karma). These lives are by no means limited to human forms; you may have had prior lives as plants, animals, or divine beings. “Remember that, the next time you step on and crush a bug; according to the idea of reincarnation, it could be your great uncle or future grandchild,” a BBC article cautions. 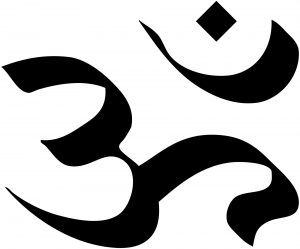 The concept of karma really piqued my interest, because to me, it seems like a double-edged sword. On one hand, it indubitably motivates people to work harder, striving for a higher station in their next lives. This is similar to ideas like the Protestant work ethic; Protestants are renowned for their dedication to work, because they believe that combining hard work, frugality, and discipline constitutes the key to salvation. This work ethic is largely credited with forming the crux of the capitalist system we all operate within. However, in the case of karma, the other side of the coin is considerably less appealing: the idea that dire circumstances, such as poverty, oppression, discrimination, etc., can be explained away by karma. It may become entirely too easy to dismiss social issues as directly attributable to a person’s performance in their previous life—and, by extension, wholly their fault, rather than the fault of problems inherent to modern societies. I believe this sort of viewpoint has the potential to warp thinking in a manner reminiscent of popular ideologies of previous eras, such as Social Darwinism, which was harnessed to justify atrocities. However, I acknowledge the nuance in Hinduism’s portrayal of karma, and would love to delve further into the topic in the future to form a more thorough, developed opinion.