The Dead Make an Appearance at the Family Reunion 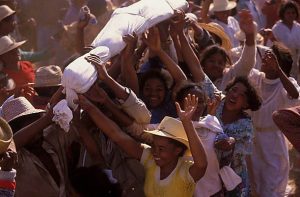 The Malagasy people of Madagascar have built a way of life around death. They perform a ritual called a famadihana ceremony, also known as “the turning of the bones”, to celebrate and reconnect with the deceased. Once every five or seven years, a family has a celebration at their ancestral crypt where the bodies are exhumed, wrapped in fine silk, sprayed with wine or perfume, and brought to community festivities. The ceremony consists of two-day festivities and family members will sometimes even travel days on foot to attend.

The first thing that occurs is the bodies are removed from the tomb, cleaned, and the old garments are replaced with new silk garments. Women who are having trouble getting pregnant will take fragments of an old shroud from an ancestor and place it under their mattress to induce pregnancy. Once the deceased has been dressed, there is a festival with a live band and the family members will dance to music with the bodies of their ancestors. It is a chance for the living to pass family news to dead and ask for their blessings.

Once stories of the dead are finished being told and the festivities have commenced, the bodies are returned to the tombs. They are re-buried with gifts of money and alcohol. The bodies are placed upside down to close the cycle of life and death and after a final cleaning, the tomb is closed to end the previous celebrations. This ritual practiced by the Malagasy people is very similar to the ritual of Ma’Nene’ performed by the Tana Toraja in Indonesia, where they practiced “cleaning of the corpses”.

Today the ritual of famadihana is on decline due to the expense of the celebrations and opposition from some Christian organizations. The festivals are a costly affair including meals to feed hundreds of guests and expensive silk to wrap the dead. Some of the poor do not have a family crypt and will save up money to build one and will hold a ceremony for their own ancestors. The bone-turning ceremony is a collective expression of respect and love for the ancestors and is a very unique ritual not seen in other cultures.