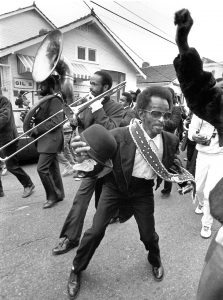 New Orleans is well known for its spectacle and pageantry of civic ritual, represented in festivals like Mardi Gras. The spectacle display is also seen in their funeral practices. Jazz funerals are used to celebrate the life of the lost community member in a fun spirted manner. The performance of Jazz Funerals is unique to New Orleans, specifically among the African American community. This tradition became popular in the late 1800s, early 1900s. The Jazz funeral generally consists of a brass band playing songs such as “When the Saints Go Marching In.” In addition to the brass band, the “second-line” parades behind the bass band consisting of friends and family marching from the church to the burial site. People can be dressed in costumes inspired by iconic figures with in the African American Carnival life. These aspects transform a sober time into one of celebration.

Jazz funerals are extremely ritualized. There is specific order to the events. Typically, before the funeral service there is a wake, of which the family and friends congregate before the service. After the wake the brass band accompanies the body on its way to the church for the funeral service followed by the second-line. When the service is completed the brass band and the second-line rejoin the body for the march to the burial site. The brass band leads the way. As part of the march the band and the second line strut and swing their bodies corresponding with the music creating a spectacle. In addition to the spirted display, individuals follow the Christian traditional practice of crying at the birth and rejoicing at death. As with everything about the funeral the rejoicing is done at specific moments and is not impromptu or undignified. The formal portion of the funeral follows the death rituals of the Christian religion.

While Jazz Funerals are a tradition, recently they are have become less common. People have opted for smaller funerals. A reason for this is the expense that it takes to perform this ritual. The cost of a Jazz funeral is high given the need of the theatrics. While performance of this ritual has diminished, its popularity still exists. This form of celebration has been adapted by other parts of the country due to migration and adaption of this tradition. The joyous form of Jazz funerals shows a different take on the somber American funerals. They put the fun back into funeral.