Similar to many practices that we’ve discussed in the blog and in class, Aboriginal mortuary rituals in Australia are much different than Western ideas. The rituals begin with a smoking ceremony. The purpose of this ceremony is to drive away the deceased’s spirit. In order to do this they smoke in the deceased home. Next, they paint ochre in places the deceased lived and put up a flag to mark that the deceased has died. There is another ceremony called the death ceremony. The body is left inside the deceased’s home while mourners celebrate before it is wrapped up and placed on a platform where it will decompose as opposed to a tomb/coffin. Instead of mourning the deceased in sadness, they feast and celebrate with singing and dancing.

Another interesting part of their mortuary rituals is that Aboriginal people in Australian avoid saying the name of the dead or depicting them in photos or films. According to ancient law, saying or depicting a dead person’s name would disturb their spirit. As can be seen from their mortuary rituals, driving the deceased’s spirit away is incredibly important. Therefore, disturbing the spirit would be just as harmful. They also believe in the rebirth of the soul; therefore, driving the spirit onward to it’s next life is crucial.

Upon reading about these burial practices, it became apparent that many of their rituals are similar to other cultures we discussed including the Tana Toraja and the Malagasy people. Mortuary rituals are extremely important to these cultures and while they may seem obscure to Western cultures, their practices hold a crucial role in their society. Many of these cultures interact with the deceased in a way that allows for celebration. The burial and funerary practices take precedence over many of the other rites of passages in these cultures. In contrast to our society, mortuary rituals aren’t even thought about usually, until someone has died. 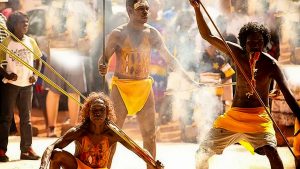 This entry was posted in ritual. Bookmark the permalink.