Posted on April 13, 2018 by Kikelola Afolabi-Brown | Leave a comment 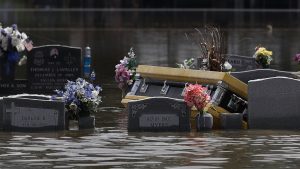 While scouring the internet for additional information for my Op-ed, I came across an article onan un usual consequence of inclement weather: floating caskets. I’ve never heard of anything thing like this before and I had no idea of how this could even be possible. Apparently floating caskets are all too common in New Orleans. The city is located below sea level on a piece of land that was formally a swamp. So in order to adapt to this environment,  citizens traditionally “bury” their dead above ground. While initially an ingenious idea, obviously burying dead people out in the open comes with some significant flaws, particularly in the face of major flooding. Whenever there is flooding in New Orleans, coffins and old bones can be found floating throughout the city alongside debris from severe weather.

Over the years, the city has worked to fortify the ground to prevent this from becoming a recurring issue, but unfortunately, Mother Nature continues to overcome their efforts. As a result of Hurricane Katrina, nearly a thousand dead bodies escaped their burial grounds and drifted around the city. Even in 2016, after two feet of rain fell in less than 72 hours, cemeteries were flooded and caskets were displaced once again. Now Louisiana requires that all coffins have some form of identification. But of course, there are still additional barriers that continue to  complicate things. Death certificates placed in coffins are often destroyed and labels wash away. Arbie Goings, of the Disaster Mortuary Operational Response Team, suggested placing bar codes on every casket, but there’s a lot more work that needs to be done  in order to accomplish this.

Even though displaced caskets are shocking and may be difficult for some to have to experience the burial ritual again, it is common for people of New Orleans to  interact with their dead by altering the burial site. Families in New Orleans typically use the same tomb or plot for each dead person. So when someone dies, the oldest coffin in a tomb or grave is removed and destroyed. Their remains are put into a body bag and placed in the corner of the tomb or grave to make way for the new addition. Some families have even used the same tombs for more than 150 years. Some organizations  establish large “society” tombs for their members to be buried. The Swiss society has its own tomb and the Italian and Portuguese society  has their own as well. 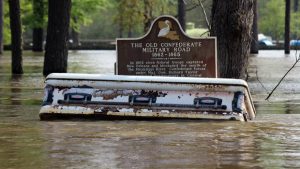 In a Wednesday, March 16, 2016 photo, caskets float away from a nearby cemetery during flooding from heavy rains in Calcasieu Parish, La. The parish Coroner’s Office earlier this month completed the recovery of caskets and vaults or lids that floated from their resting places during flooding March 12 and beyond. Officials said 85 caskets were recovered, most from Niblett’s Bluff Cemetery in Vinton. The recovered remains have been placed in refrigerated trucks parked at the coroner’s office as investigators begin the identification and re-interment process. (Emily Dalfrey via AP)

New Orleans has very unique cemetery practices that have proven unsuitable for severe weather. It’s humorous as an outsiderbecause I’ve never imagined anything like this before but understandably disheartening for the loved ones who have to deal with this issue. I am not sure if there will ever be a permanent solution to keeping the caskets in their place. However, if this issue eventually becomes unbearable, residents of New Orleans  could consider using other funerary options such as cremation or mausoleums.