The “rights” to suicide?

Death is a very difficult problem to deal with, especially when suicide is the cause. After a suicidal death, other than grieving, people often feel guilty as well as angry toward the deceased person because they feel that the person’s death is related to them. Suicide represents the tie between the society and the individuals. As we have learned in class, a too strong or weak tie between the person and society can lead to different types of suicide. Suicide is very personal because the choice is made by the individual. However, it is also not personal because there are many external factors that influence a suicidal decision. In my opinion, when deciding to suicide, people often try to identify themselves in relation with other people in communities. Therefore, the society’s value and culture indirectly control whether or not a person has the “rights” to take his own life.

In class, we talked about suicide in suicide bombers. These people are willing to give up their life for the future of the society. This is partly due to the fact that society glorifies their death as heroic. The suicide bomber might feel that he will bring honor to his family and nation. Such relationship between the individual, family and society gives the person the “rights” to take his own life freely.

However, in some cultures, people are not “allowed” to take their own lives. In countries with strong Buddhism influence, the value of families is especially emphasized. In a very famous Chinese tale, Nezha is a child deity. As a little child, he accidently kills the Dragon King’s son who comes to bully his friends. Nezha’s father who is always not pleased with Nezha almost sacrifices his son to save the people. However, Nezha kills himself first to save his people from the wrath of the Dragon King. Nezha did not just kill himself; he carves his flesh and bones and returns them to his parents. This action is to repay the “debt” of his parents giving birth to him. The following is an excerpt of the tale, when the Dragon King demands Natra to “take responsibility” for his action: http://www.youtube.com/watch?v=8THpvyba3Lg. From this tale, there is a notion that your body does not belong to you. It is given to you by your parents and you have no rights to destroy it without their consent.

Why do we feel angry at the deceased and think that the person is “selfish”? The person is selfish because he did not consider the feeling and well beings of other people, even though his body is supposed to be his own to take? Therefore, society’s value in some way gives a “yes” or  “no” to a suicidal act. When a person disregards the social value, his death is regarded as a bad death.

On October 4th, Vietnam has been shaken by the news of General Vo Nguyen Giap’s death (at 103 years old). He is one of the most respected and well known military leaders in Vietnam after Ho Chi Minh. He led the North Vietnamese in the war against both France and America. Every Vietnamese, who grew up in Vietnam, learned about Gen. Vo Nguyen Giap’s contribution in unifying the country, or at the least have heard of his name. General Vo Nguyen Giap’s death was carried out as a national funeral, which is similar to America’s state funeral, in order to honor his achievement and contribution to the country. This is one of the rare death events, in which I was able to see death and its impact on people on such a grand scale. 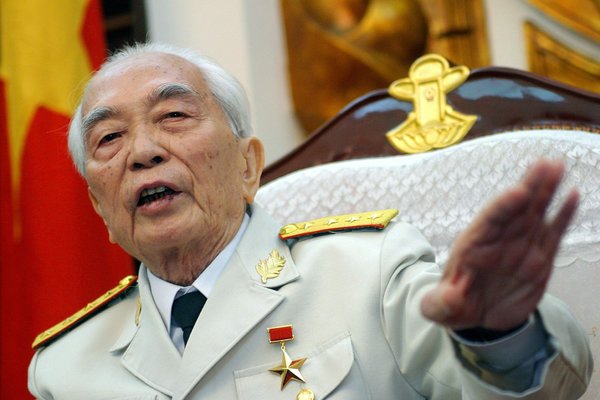 When people think about death, they often think about the grief that the living people experienced. Grief has many forms and is handled according to the culture. In many cultures, grief in public supposed to be a calm and solemn display of emotion. After the news of Gen. Vo Nguyen Giap’s death, thousands of Vietnamese from all over the country traveled to North Vietnam, where his family is to pay condolences. The line of people waiting to come into Gen. Vo Nguyen Giap’s house and pay respect wrapping around many streets in Hanoi was an extremely significant picture. There were many adults, children, elders, as well as retired soldiers standing in the heat of Hanoi. People from all over Vietnam coming to Hanoi brought flowers, poems, and songs written about Gen. Vo Nguyen Giap. People who come to funeral are not supposed to disturb the solemn mood and have to pay condolences in prescribed way of that culture. In Vietnam, waiting in line in public is not a common practice and is considered as a recently “imported” cultural behavior. However, people were waiting patiently for hours in Hanoi in order to express their grief and sincerity.

It was surprising to see grief experienced by that many people toward one person. There has to be some form of bonding between the dead and the people who experienced grief. This bond can be biologically made (such as in family) or culturally made. In cases of natural disasters or mass murders, people often feel sympathy for the tragic death of the victims. It is a cultural behavior to express sympathy to show your humanity side. ”Bad death” also often provokes extreme emotion such as anger and depress.  In Gen. Vo Nguyen Giap’s case, his bond with the people in Vietnam is culturally made by people learning about and seeing him through book, television and the news.

When a person’s social status is high, having a good death including a good funeral is important. In many cultures, having a lot of people attending a grand scale’s funeral proves that the dead person was a beloved and important person when he was alive.

The effect of social media on death

At the recent seminar, one of the concepts that I found interesting was about the effect of social media on death. As technology advances, social platforms such as Facebook and Twitter improve the means for people to contact and reach out to each other. The effect of media can be both positive and negative. One effect that we can see clearly is the returning definition of death as a social event. In history, death was a more public social event. However, after we were able to learn more about death and even interfere with it, death became the symbol of defeat, grief, and a horrible destiny that many people wish to avoid. The following article “How social media is changing the way we approach death” (by Paul Bisceglio), using Scott Simon case as example, talks about the positive effect of social media by making death a public event. According to this article, near death people who suffered from terminal illness and their relatives can find comfort and happiness from their “followers”. When you are lying alone in the hospital bed, unable to sleep, how nice would it be to receive support from hundreds of people from all over the world? Bisceglio also points out that this publicity on death would give other people the real information about near death experiences so they can be more prepared for their future. As you comment on Facebook of someone who has passed away, you will be able to share the sympathy and feeling about the person who is dead and think about your own future. The “followers” might feel that they also hope to receive the same support and comfort when their time comes.

The interesting question to me is that how people have suddenly changed from the perception of death as an unfortunate, private matter to an encouraging and public event. Maybe it is again, the cultural changes that influence death. When we weren’t able to do anything about death in the past, we were able to accept and prepare for death. Now, when we encountered terminal diseases for a long time and have not figured out a way to “conquer” them, people start to accept the unavoidable death again. This kind of acceptance spreads even more rapidly thanks to the network of social media.

Social media doesn’t affect death only in a good way. Although, we are returning to the ancient concept of death as a public event, now the scale is much larger. A town public event is nowhere similar to a global public event. And the media network has the power to give death its global appearance. One of the new problems that social media brought to us is the new concept of “haters”. Especially in celebrity’s cases, in their death and near death experiences, there can be many hurtful comments and opinions that deepen the pain in that person as well as in their families. I have seen cases where people create fake Facebook pages to take advantages of the dead by pretending to raise fund for the family of the dead person. This lead to the question of how much death can be a public event? At what point should we share our death experiences with others?