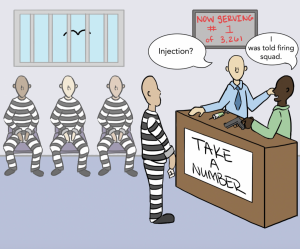 The Kelly Gissendaner case has been in the media for almost two years now. I remember about a year ago signing a petition to not have her executed. On Wednesday the 30, Gissendaner was finally executed: the first female prisoner executed in Georgia in the last 70 years. This case was incredibly similar to the Terry Shaivo case because two sides were fighting over the life of a woman, and even the Pope got involved.

Gissendaner was convicted of murder in 1997 for persuading her lover to kill her husband, though she did not commit the actual murder. The Pope, Kelly’s children, and many liberals around the country pleaded to not have Kelly given the death penalty while the family of her late husband prayed that the legal system would come through and put her to death. Much of the controversy around the case expounded from the fact that Kelly, throughout her many years in prison, Kelly converted to christianity and became very strong in her faith. She prevented women from committing suicide in prison, encouraged other women to turn their lives around, and created a theology study for other prisoners (helped some by Emory). Sadly, none of these people could help Kelly in the end and the Georgia government sentenced her to death anyway.

While I could spend an extended amount of time discussing the ethics and effectiveness of the death penalty in America, (which I do not agree with) something even more interesting comes in to play when looking at the Gissendaner case. When Kelly was finally executed, not only did she sing Amazing Grace, but her final worlds were incredibly meaningful and representative of why people were fighting for her life. In a fit of tears, she exclaimed “and I love you Sally. And I love you Susan. You let my kids know I went out singing Amazing Grace. And tell the Gissendaner family I am so sorry. That amazing man lost his life because of me and if i could take it back, if this would change it, I would have done it a long time ago. But it’s not. And I just hope they ding peace. And I hope they find some happiness. God Bless you.”

There are many important parts of this speech. The idea of final last words is strong and here I think Kelly attempts to find some reception before she dies, and she also addresses the fact that her dying doesn’t change anything about the murder that was done, however she clearly very much wishes she could change the fact that the murder happened. It means a lot that in the moments before she was about to die, Kelly is hoping for the lives of the people that are putting her to death.