The Obsession with Death, But Fear of Dying

In my observation of society there has always been an obsession with death. Death is everywhere in pop culture from blazing articles on tabloid pages at the supermarket to brutal deaths being common place on the television screen. Yet as a culture we also seem to have this intense fear of dying. 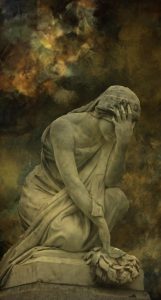 Recently I found myself binge watching Buzzfeed’s Unsolved series, a YouTube series where two men try to prove that ghosts are real or dig into famous mysteries usually pertaining to gruesome, to unsolved deaths. I do not know why I started watching it, but clearly other people are doing the same for their most recent video, posted less than 24-hours ago, has over a million views. While the ghost and demon episodes will often get my heart racing, it is the one’s that explore real unsolved deaths or murders that stick with me. In a completely morbid sense it is compelling. One would think that because we are so open about death and exploring how someone might have died, that the process of dying should not be a taboo topic. But, as soon as death is brought up in the personal sense the discussion ends. Suddenly, it is completely unreasonable to talk about death. A guy’s head being put on a spike on Game of Thrones = fine, but talking about your own opinions surrounding your unavoidable death = over sharing.

There are exceptions to this of course. I am very lucky to still have three of my grandparents alive, and recently the topic of dying has been a discussion between my maternal grandparents and me. While at first I was uncomfortable, after taking a deep breath I realized the topic was not morbid at all. In fact, it was in some ways heartwarming. My grandfather described his desire to have his and my grandmother’s ashes mixed and my grandmother told me their plan to meet at “the pearly gates of heaven,” though they have yet to decide on which side of the gate. Here were two people I love with all my heart talking about their own deaths and it brought a smile to my face.

But, this is a discussion I know many do not have. My grandmother recounted a story of her friend that refuses to talk about his own imminent death with his grandchildren, “because it is too sad.” And I can understand that point of view. Everyone should be able to make their own decision on their level of comfort when it comes to discussing death, but from my personal experience I feel reassured after my discussions with my grandparents. While the thought of losing them breaks my heart, it is also mended by the fact that I know that they are not scared of what death may bring. I am becoming more and more curious as to why these conversations on death cannot be public discussions, as well as private ones. 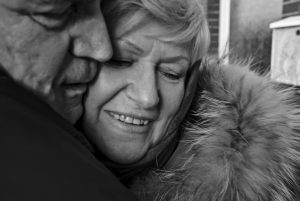