Posted on October 28, 2015 by Kelly Elizabeth Broen | Leave a comment

This summer, I had the pleasure of traveling to Ireland with my family and visiting the World Heritage Site, Brú na Bóinne. The most well-known tomb at the site it Newgrange and dates back 3200 B.C. Newgrange is a massive stone structure, weighing over 2,000 tons, and has a single passageway at the end of which human remains were placed. Every year on the winter solstice, light shines through the opening of the tomb, all the way down the passage to where the bodies rested. Although it is impossible to know the exact significance of the burial site, many archeologist suspect the culture regarded the ceremony as a way to guide the bodies into the next life. Some archeologists interpret the hieroglyphics carved into the surrounding stones to indicate the culture considered the sun to be a god, as was common in many agricultural societies who depended on the seasons for food. Because the tomb could not hold many bodies, it is suspected that only people of significance took part in the burial ceremony.

Brú na Bóinne is just one example of the many prehistoric burial sites that incorporated the sun and astronomical phenomena into its construction. Perhaps the most famous example is Stonehenge, found just outside Salisbury, England. Also estimated to have been built approximately 3000 B.C., two of the stones of Stonehenge align with the sun on the summer equinox while there is a different alignment of the sun and stones on the winter equinox.

Brú na Bóinne and Stonehenge are just two examples of archaeoastronomical sites; such sites were built on every continent except Antarctica. Although it is impossible to determine ritualistic meaning of these prehistoric sites, it is fascinating that such a diverse range of cultures incorporated similar concepts into their burial rituals. As mentioned previously, many agricultural societies considered the sun a deity and therefore solstices and equinoxes would have been major events which these monuments incorporated into mortuary rituals.

While the idea of being buried in a casket spans multiple societies, Ghanaians have put a modern twist on this tradition. “Fantasy coffins,” as they have been dubbed by reporters, are caskets shaped like something relevant to the person being buried. From cars to animals to mobile phones or even a camera, Ghanaians are requesting increasingly diverse casket shapes. Just what do these unique caskets represent? For some families, the casket shape represents what the person loved to do- a pineapple shaped coffin for a man who grew pineapples, one that is fish shaped for a fisherman, etc. Others can represent some sort of ambition- a woman who had never flown before was buried in a casket shaped like a plane. The choice of casket design can be a reflection of status, with some being shaped as luxury cars or other high end products. Of course, some people choose a more religious design. One carpenter in Accra told BBC reporters one of his most popular designs is the Bible. 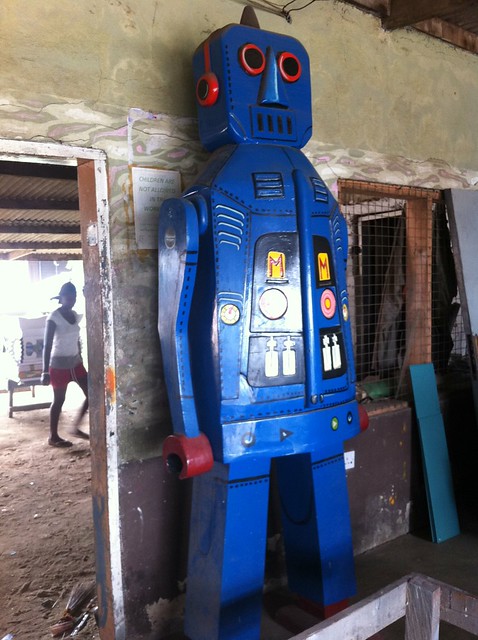 An example of a “fantasy casket” shaped like a robot. Photo credit: “Robot casket” by sshreeves licensed by CC 4.0

While the casket designs may seem lighthearted, Ghanaians still take death very seriously. By purchasing an elaborate casket, it is a way of showing respect for the family member who has passed. Also, the price tag of these custom made caskets is very high, starting at around 1000 Ghanaian cedi or approximately $250; many Ghanaians make this much in a year. Casket design can also be a point of contention among the family members of the dead if the deceased never left a clear indicator of what they would like their casket to be shaped liked, with family members disagreeing about what design is most appropriate to take the body into the afterlife. However, most families can agree that the purpose of the casket is to provide a respectful and meaningful vessel for the deceased.