The Comedy of Mortality

Death is usually regarded as a tragic event. People grieve and mourn over the loss of a loved one and will feel compassion when someone else is going through that pain. There are, however, ones who mock death and ridicule the deceased. Examples of this are the television show 1000 Ways to Die and the Darwin Awards website. Is this completely disrespectful or can it count as legitimate comedy? 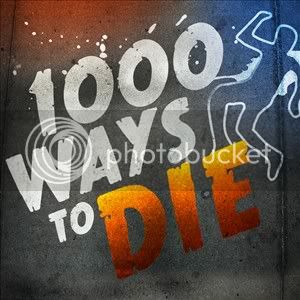 First, let’s take a look at 1000 Ways to Die. This was a television show that ran from May 14, 2008 to July 15, 2012 on Spike TV. The show recreates unusual deaths and the narrator presents them in a lighthearted way. Then a team of professionals (pathologists, toxicologists, etc.) explain exactly how the unfortunate victim died. After that, the death was given a number and a title which is usually a pun of some sort. The victims of the show are usually presented as being either horrifically awful or horrendously incompetent people who apparently “get what they deserve”.  One notable exception to this formula was death number 1000 which was titled Premature Endings. Here, the victim was a dying old man who had lived a long and fulfilling life. The narrator then gave a speech about how we should strive for living and dying respectfully like the man. He concludes by saying that this show “has been an instructional manual for how to live”.

Now, let’s take a look at the Darwin Awards which is a website that was founded in 1993. They present stories of people performing senseless acts and paying the ultimate price for it. There are rules for the site. One example  is that the victim must be able to make sound decisions on his or her own; this prevents the mocking of children and people with mental handicaps. Similarly to 1000 Ways to Die, the Darwin Awards claim to be “macabre tales that make [people] laugh while instructing [them] in the laws of common sense”; however, one major difference between the two is that the accidents feature on the Darwin Awards are real (this is another one of the rules of the site) while the ones on 1000 Ways to Die are fake (some of the stories might be true, the show usually changes a few details).

So, now back to the original questions. First, are they disrespectful? 1000 Ways to Die does openly mock some of their victims, but as I mentioned earlier, they are usually depicted as terrible people. The ones who aren’t are treated with much more respect. As for the Darwin Awards, they mock the decisions that were made rather than the people themselves. What about them legitimate forms of comedy? Well, that honestly depends on one’s sense of humor. Some people will be absolutely appalled while others might be slightly amused by the dark humor. Personally, I have found some of the stories from both mediums to be humorous and others to be disgusting. So what do you think? Is it okay to poke fun at the dead or should they be off-limits?

A fair warning: some of the materials on the sites may be graphic and NSFW (Not Safe For Work)