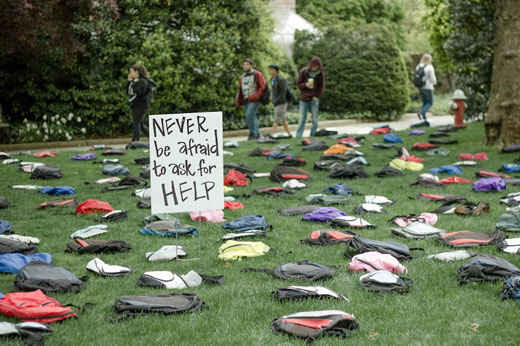 On November 1, 2012, Emory hosted the Send Silence Packing exhibit. As I walked to my last class of the day, I came across many backpacks dispersed about the Quad. As I got closer, I saw that there were personal letters or notes written by friends and relatives, telling a short story of the tragic loss of their loved one to suicide. With each step I took along the sidewalk, I viewed the letters of other deceased college students. Lifting my head, I realized that these people were once students just like me, stressing out about classes, but something about their situation made their only solution suicide. Suicide falls closer than we expect. The 1100 backpacks represented the students who have taken their own lives in the past year alone. For more information go to: http://news.emory.edu/stories/2012/10/er_send_silence_packing/campus.html
Or the Send Silence Packing webpage: http://www.activeminds.org/our-programming/send-silence-packing
Suicide has left a mark on our younger generation. It is interesting that although it is so prevalent, its stigma makes it a subject not openly discussed. It is such a difficult topic that many suffering from depression do not seek help. However, a mental health issue must be handled appropriately. Furthermore, there is no “type” or person who commits suicide. At a school of diverse students, this issue should top priority because anyone of any background can suffer from mental illness.
This silent epidemic is taking our loved ones away from us. The worst thing to do when dealing with an epidemic is nothing. The lack of attention and effectual solutions to this problem produces incessant reports of suicide throughout the country. Therefore, it continues, spreads, and will continue to do so until we as a society take preemptive steps to avoid this last resort and help the people who are in this situation.
Something has changed that has caused problems to be so unbearable that the only answer is death. It is especially problematic because with this exhibit, the victims are college students. The stress of college can be intimidating. Not only do students concern themselves with academics, but also work, paying for school, approval from parents and professors and friends, their future and career. Although college is supposed to be the best four years of your life it can also be the worst and last years of a student’s life. There have been strategies to help depressed students, but how far have we come to where suicide is not statistically significant?

Imagine going to your sister’s house to investigate a possible intruder. After a brief struggle with the intruder, you fire your weapon and the intruder collapses. You immediately pull off the mask of the intruder only to find that the intruder is your son. This seems more like an urban legend than actual reality but this is just what happened in Connecticut last month. Jeffrey Giuliano who lived next door to his sister hurried to his sister’s house one night after receiving a frantic phone call that someone was trying to break into her house. Upon walking outside, he saw the intruder, who was holding a knife and quickly discharged the firearm after an intimidating confrontation. Unbeknownst to him it was Tyler Giuliano.
Grieving is a natural part of losing a loved one but with grief comes several other emotions. Accidental death is traumatic. It conjures feelings of guilt because the question of prevention seems to arise. Guilt is an expected stage of grief but it takes a more profound role when one assumes the responsibility for someone’s death. In this case, Giuliano’s accidental murder of his son is most traumatic because it could have been prevented.
Who was at fault? Was it the teen’s mistake because he pretended to burglarize his aunt’s home and charge toward his father in an intimidating way? On the other hand, was it the father’s fault for taking things into his own hands and not letting the police handle the problem? One thing for certain is that a life was lost at an unfortunate cost. A little prank cost Tyler Giuliano his life; and Jeffrey Giuliano’s attempt to protect himself and his sister cost him his son’s life.
I think that this is a tragic event. Not only did Jeffrey Giuliano lose his son but also he has lost his peace of mind. I can only imagine the emotions running through his mind. Guilt, sadness, depression, even thoughts of suicide may be issues that he struggles with for the rest of his life. Death is already hard to deal with. Adding guilt or responsibility to the death of a loved one makes it even more difficult to carry on. How will he carry on? I assume that Jeffrey Giuliano will seek counseling to help overcome the extreme feelings of guilt. The worst part of this entire situation is that there will always be unanswered questions. This tragic event does however serve as a warning for others who think of playing similar pranks.